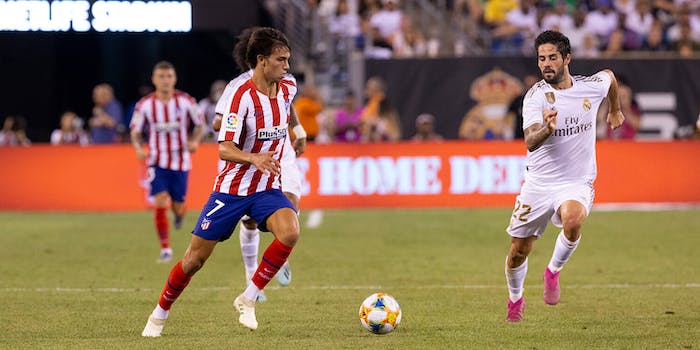 How to stream Atletico Madrid vs. Granada live

Atleti starts a very busy eight-day stretch with a trip to Granada.

Atletico Madrid’s just back from international break, and it’s already got a huge week ahead of it. The team travels to Turin for a huge Champions League match on Tuesday and then faces Barcelona in a match that could have title implications. But in the meantime, as Atleti’s sitting in the middle of a five-team pileup at the top of the table, it has the chance to better its position as it travels to Granada.

Here’s everything you need to know to stream Atletico Madrid vs. Granada live.

Atletico Madrid (Recent form: DWDDW) currently sits in third, a point behind usual suspects Barcelona and Real Madrid. There’s a bit of a troubling trend afoot by Atleti standards: After a whole string of shutout matches, the defense has let in exactly one goal a game in its last four matches in all competitions. But Atleti’s also undefeated in the three La Liga matches in that string, including a 3-1 win over Espanyol last time out in which Angel Correa, Alvaro Morata, and Koke all got on the scoresheet.

Granada (Recent form: WWLLL), meanwhile, has lost three straight to slide to eighth in the La Liga table, but in this weirdly competitive season, it is still just four points out of a Champions League spot at present. In its last match with Valencia, it hung tough until almost the 75th minute and then let in a game-winner followed by an insurance goal in stoppage time.