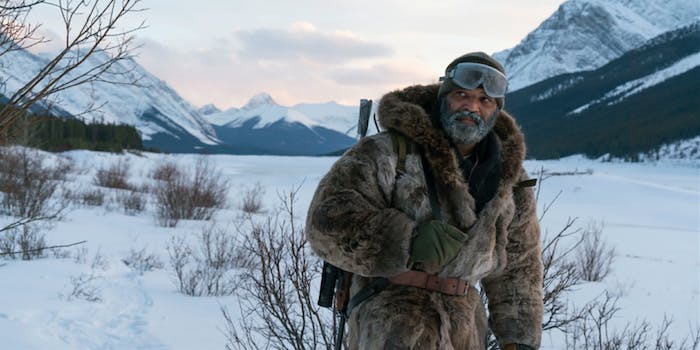 The new Jeremy Saulnier film is icy, gory, and a little boring.

Hold the Dark, the latest film from Jeremy Saulnier and his first for Netflix, conveys the feeling of cold so expertly that it lingers long after you’ve watched. It is a full-body experience; the Alaska depicted in this film is both hungry and distant.

And yet, for all its expert scene-setting, the film never quite reaches the climax many viewers likely anticipate. Saulnier’s previous two films, Blue Ruin and Green Room, have crime-noir foundations and explore what happens when people are put in unfavorable situations. The same is true with Hold the Dark, but there’s a little too much grey area.

Macon Blair, who starred in Saulnier’s past films (and makes a fateful cameo in this one), adapted Hold the Dark from William Giraldi’s 2014 novel of the same name, and Westworld’s Jeffrey Wright plays Russell Core, the novel’s wolf researcher. He’s called to the small Alaskan village of Keelut—also the name of an evil spirit in Inuit mythology—by Medora Slone (Riley Keough) to investigate the disappearance of her son. She assures him wolves took the young boy and orders him to kill the one that did it so she can have answers for her husband Vernon (Alexander Skarsgård), who is fighting in Fallujah.

That’s where we first meet Vernon, as he is mowing down enemy combatants with a blank look on his face, and that look never really changes as the film progresses. Back in Alaska, Russell is trying to figure out Medora’s motives and they have a few low-talking, subdued exchanges that are more curious than affecting. I started wondering if Wright was just channeling Bernard from Westworld, and maybe this movie was just him in another reality.

Save for a stunning, extended shootout between local cops and Vernon’s friend Cheeon (the excellent Julian Black Antelope)—which is the only time the villagers’ thoughts on outsiders and police is really discussed—the film remains subdued. And it leaves us with some plot holes. Russell knows from villagers that there is something evil there, and that it might have to do with wolves, and that Medora might be part of it, but the mythology is never really explained. Vernon and Medora’s past with the Native people is also never sketched out. There are references to PTSD and postpartum depression, but they’re never explored at length.

It is implied that Vernon has something inhuman in his blood, though, and when he returns from war he picks up a wolf mask and gets bent on revenge. At a post-screening Q&A after the film’s Fantastic Fest debut, Saulnier said he didn’t want to use CGI and that he employed real wolf actors—indeed, he gets more of an emotional reaction from the wolves than the humans at times. But there was a tiny part of me that expected Skarsgård to shapeshift, especially after it’s suggested he “let the wolf out a little.”

But Hold the Dark’s isn’t a shapeshifting Skarsgård kind of movie. Its revenge narrative unfolds more organically, but without much context or clarity; Blair sketched out a much more engrossing character with his debut 2017 film, I Don’t Feel at Home in This World Anymore. Often it’s the mark of a good film when you’re left with questions about what just happened, but Hold the Dark mostly just leaves that feeling of cold.