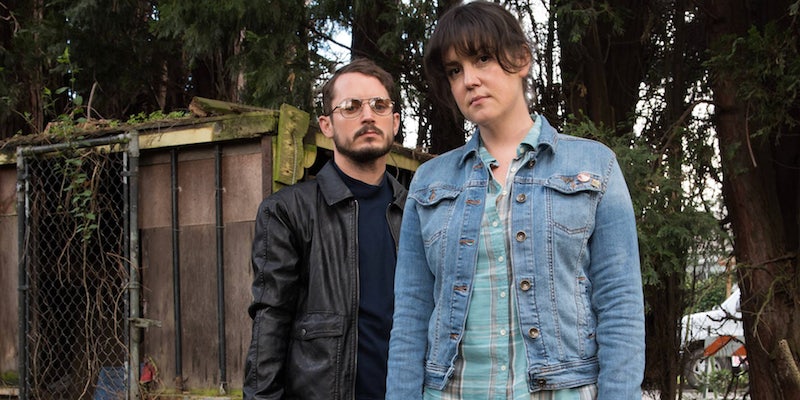 I Don’t Feel at Home in This World Anymore surely reflects a national mood with its themes of frustration, alienation, and existential crisis. But the film, from first-time director Macon Blair, drills down much deeper into the human experience and how we deal with violation—and the assholes and “fuckfaces” of the world.

In the film, out Friday on Netflix, Melanie Lynskey plays Ruth, a nurse who’s shuffling through life’s daily indignities. She’s jolted awake after her house is burglarized, and in her new quest to find the person behind this violation, she recruits Tony (Elijah Wood), a neighbor who’s been leaving dog shit in her yard. But he has throwing stars and nunchucks, so they form a vigilante squad and try to track down the weirdos who robbed her.

Blair—who starred in childhood friend Jeremy Saulnier’s 2013 sleeper hit Blue Ruin and 2015’s Green Room—deftly frames it all, from the creeping intimacy of home to the vastness of the woods. A real robbery prompted the premise: His apartment was broken into when he lived in New York, a laptop and some “sentimental” items stolen. And, as in the film, law enforcement wasn’t much help.

“So that little germ of an idea is maybe what started it,” Blair tells the Daily Dot from Austin, Texas, where he’s lived for the past three years. “But then we just sort of followed that thread out to the most absurd conclusion we could come up with.”

The tonal shifts are abrupt in Home, from physical comedy to sprays of violence to the bloom of love. Ruth’s emotional reaction is filtered through some darkly comic scenes; after the robbery, she reads a book to a friend’s young daughter and is brought to tears by one passage: “No one knows how big the universe actually is. It could be infinite.”

Blair, who makes a cameo in a bar scene with Ruth, says he had a character sketch of a nurse who realizes people “may or may not be worth saving” for a couple years, but didn’t know where to put her. Once the storyline of Home started coming together, he thought it’d be interesting to observe her there. Blair says Tony’s “ninja stuff” comes from his childhood as a “D&D ninja geek,” and he thought it’d be funny to see a grown man so invested in them.

“His goofy little hobbies can in some way save the day,” he adds.

The third part Blair wrote was Marshall, played by Scratch Acid and Jesus Lizard frontman David Yow. When we first see him he’s legitimately terrifying, a flame-lit witch taking offerings from his followers (played by Jane Levy and Devon Graye). Scene by scene, he becomes an almost comical figure as they bumble their way through criminal acts. The final chase scene, in which Marshall tracks Ruth through the dense green woods, is a masterful bit of physical comedy, and while it feels less on theme than the first half of the film, it’s the absurd conclusion Blair had in mind.

Blair says directing took him back to his childhood with Saulnier. They grew up in Virginia and would shoot short movies in their neighborhood. “Ripoffs of RoboCop, cop-versus-drug-dealer-type stuff,” he says. “Which was just an excuse for us to stage action sequences and stunts and special effects.”

When they were in middle school, they made their first movie, called Mega Cop. Next year Netflix will debut Saulnier’s latest film Hold the Dark, which will once again feature Blair.

It’s obvious Blair’s always been drawn to outsiders and fringe elements, and while Home is certainly a bone-breaking ode to gritty crime dramas, it also draws some great moments from its hapless citizen detectives. When Ruth and Tony are trying to track down the suspects’ van, he types “Look up license plate?” into Google.

“That’s the problem with doing a detective story in the modern age,” Blair says. “All the cool detective stuff that normally would be like going and knocking on doors. You just have to look on the internet and nine times out of 10 it’s going to tell you what you need to know. So we were trying to make a joke out of the fact that modern detective stories are kind of hampered by technology.”

The film is a lot to process, and Ruth’s fight against injustice doesn’t deliver the typical catharsis. But Blair explains that even if it does reflect the national mood, he wants people to come away with a more positive view of humanity: “We didn’t want to punish people.”