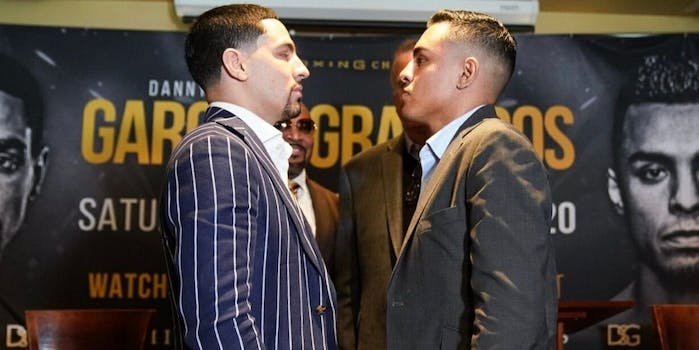 How to watch Danny Garcia vs. Adrian Granados for free

Garcia is looking to get back into the title mix at welterweight.

The last two times a welterweight star has fought what we assumed was a lesser opponent on a Fox primetime broadcast, the underdog nearly pulled off the upset. That’s all the more reason to watch the live stream of 147-pound titlist Danny Garcia vs. Adrian Granados on Saturday.

Granados is the kind of fighter that could put a little fear into Garcia. And unlike Josesito Lopez and Yordenis Ugas—who nearly beat big-time betting favorites Keith Thurman and Shawn Porter, respectively, on Fox within the past few months—Granados just might be good enough to pull off the upset against the well-established Garcia.

Here’s all you need to know to live stream the Garcia vs. Granados fight.

If you’ve cut the cord on cable and can’t watch Fox on television, here’s some good news: Every major live streaming service offers Fox, and each one offers at least a one-week free trial. That includes YouTube TV and DirecTV Now. Aside from some of the best options to stream Fox (listed below), you can watch the event on the Fox Sports app, which is available in English or Spanish, and on your desktop via FOXSports.com.

After the main card is over, FS1 and Fox Deportes will host more fights, starting roughly at 10:30pm ET with Jeison Rosario fighting Jorge Cota. Also in action on the later card is former title challenger Alfredo Angulo and 2016 U.S. Olympian Karlos Balderas.

To watch the Garcia vs. Granados fight online via Sling TV, you’ll need to have either Sling Blue ($25 per month) or Sling Orange + Blue ($40 per month). Both packages include Fox and FS1, so you can see all seven fights that are being offered on Saturday night. It’s a nice perk for Sling subscribers that they can order a la carte packages, but if you want ESPN, you’ll have to spend a little more per month. Sling TV also offers a special Latino package for bilingual viewers. Sling TV is also currently offering a deal where you can subscribe for 40% off the regular price for the first three months of your subscription. (Here’s a complete guide to Sling TV channels and our Sling TV review.)

With nearly 60 channels of live TV streaming and a massive on-demand library of TV shows, movies, and original series, Hulu with Live TV is a great option. It’s also the best way to bundle your streaming services into one place. (Here’s the complete list of Hulu Live TV channels.)

One thing that separates PlayStation from the rest of the streaming services is that it’s compatible with Kodi. No matter how you stream, you’ll get to choose from four tiers of channels, all of which include Fox, FS1, FX, HGTV, Syfy, and more. You can see the full list of PlayStation Vue channels here. Plus, you can stream on up to five devices at once, and there’s unlimited cloud DVR.

Unfortunately, Locast, a free not-for-profit service, isn’t available everywhere. But if you live in New York City, Philadelphia, Chicago, Houston, Denver, Boston, Dallas, or Washington, D.C., you’re in luck. That’s because Locast allows residents in those areas to watch all local channels, including the Fox affiliate, for free from your web browser. If you have Google Chromecast or a comparable device, you can then “cast” Garcia vs. Granados to your big screen.

Danny Garcia vs. Adrian Granados: Why it matters

Five years ago, Garcia (34-2, 20 knockouts) was one of the top faces at the 140-pound junior welterweight level. He was undefeated, and he was a unified belt-holder. He had twice beaten Hall of Famer Erik Morales and had knocked off top-notch fighters like Amir Khan and Lucas Matthysse. But he’s had more mixed results since moving up to 147 pounds, and he’s lost two of his last three entering Saturday’s fight. Sure, his two losses were to Keith Thurman and Shawn Porter—two of the elite boxers in this division—but the 31-year-old has plenty of work to accomplish to be seen as one of the best fighters at welterweight.

Though Granados’ record isn’t particularly impressive—he’s 20-6-2 with 14 KOs—he’s more dangerous than he lets on. He has a couple of nice wins versus Amir Imam and Mark Salser, both of whom were undefeated at the time. He also very nearly beat Adrien Broner in 2017, and he’s lost a number of split and majority decisions (in other words, he’s been on the wrong end of a few very close fights). If Garcia isn’t careful, Granados could test him.

“I think I have more dog in me than Danny does,” Granados said. “He complains a lot and also gets away with a lot. He does what he has to do to win. I’ve never been given anything and I think I have a lot more to prove than he does. My fights against Shawn Porter and Adrien Broner were good preparation for this. I think against Broner I should have gotten the decision, but I didn’t. Against Porter, I fought the wrong fight and missed the chance I did have. I’ve got a chip on my shoulder from both experiences. This is my chance to show the boxing world that I’m elite and get my title shot.”

Still, Granados is an 8/1 underdog —in part, because this is only Granados’ third fight at 147 pounds and his previous two opponents had a combined record of 32-29-3. (Garcia is a -1600 favorite, meaning you’d have to wager $1,600 to win $100.) Plus, Garcia is likely still talented enough to challenge the absolute top of the division in Terence Crawford and Errol Spence.

A win versus Granados could get him closer to a big-time matchup with one of those two fighters.

“This is another fight for my legacy,” Garcia said. “There have been a lot of great fights in my career and this is another important one for me. I know he’s coming to fight, but I’m looking to make this one of my easiest wins. He’s a tough and aggressive fighter who likes to throw a lot of punches. He’s hungry, and that’s the type of guy that you have to watch out for. I’ve got to handle my business against Granados before I look to any bigger fights.”

*Available only on the FS1 broadcast, which is available on most of the streaming services listed above. Those fights begin at 10:30pm ET, after the main card on Fox is completed.