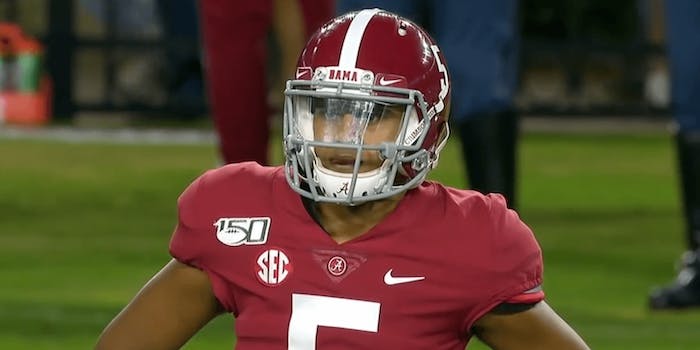 How to stream the big ol’ Alabama vs. LSU game

It's a monster matchup.

The No. 1 LSU Tigers make the short trip to Tuscaloosa to take on No. 2 Alabama Crimson Tide on Saturday in what could be a preview of an eventual national championship matchup.

LSU quarterback and Heisman candidate Joe Burrow went 32 of 41 for 321 yds and two total touchdowns, in the Tigers’ most recent game—a hard-fought 23-20 win over Auburn. Running back Clyde Edwards-Helaire had a great game, rushing for 136 yards. LSU stamped out any semblance of a passing game from Auburn’s Bo Nix, giving up just 100 yards in the air. However, the lack of pass rush pressure continued to be an issue for LSU.

Led by backup QB Mac Jones, who went 18 of 22 for 235 yards and three TDs, Alabama prevailed over Arkansas 48-7 in its last game. RB Najee Harris gained 86 yards rushing and two scores on 13 carries. The electric Jerry Jeudy pulled in seven receptions for 103 yards and two scores. The Crimson Tide forced four Arkansas turnovers and didn’t allow a TD until the fourth quarter.

Somehow Alabama comes in as a near-TD favorite with a 71% win chance, per ESPN’s Football Power Index. How is this possible, considering the Tide have zero notable wins, especially compared to LSU’s gauntlet? Two things come immediately to the forefront. LSU’s pass rush isn’t special, which could leave the returning Tua Tagovailoa in line for a monster passing day with Jeudy and Henry Ruggs III. Even more importantly: Simply put, the Crimson Tide have to have it.

This game means exponentially more to Alabama than LSU, which could theoretically withstand a close loss on Saturday—if it’s their only loss—and still make it into the College Football Playoff. A loss for Alabama would put them in (relative) dire straits, due to their severe lack of non-conference competition and weak SEC draw for 2019.

Yes, there is a scenario that puts a one-loss Alabama team on the outside looking in, a team that would need help to get in. It’s a scenario head coach Nick Saban will be desperate to prevent from happening, as it would put their scheduling under additional scrutiny. Expect Tagovailoa and company to play with an unique urgency against LSU.

How to stream LSU vs. Alabama live: Watch SEC football

LSU vs. Alabama: What to watch for

Alabama’s chances of winning will likely live and die with the availability of Tagovailoa, in whatever capacity his recovering ankle injury will allow. ESPN’s Chris “Bear” Fallica recently spoke at an event in Mobile, Alabama, illuminating a most-likely scenario.

“There’s a different feel to it this year,” Fallica said. ” LSU has scored 10 combined points the last three years against Alabama. I would be surprised if they didn’t have 10 points by the end of the first quarter this year. There’s so much intrigue around the renaissance of the LSU offense with (assistant coach) Joe Brady and what the staff has done with (quarterback Joe) Burrow, and if they will be able to combat Alabama’s offense. Hopefully, Tua will be good to go on Saturday—I would expect him to play if he can deal with the pain. I think we’ll get, maybe not quite Big 12-style football, but an entertaining aerial assault type of game.”

The over/under is set at 64, which seems about right, though the fireworks might not happen until the second quarter as the teams feel each other out.

Though they are the lower-ranked club, Alabama is a 6.5-point favorite, according to Odds Shark. Alabama has also win eight of the last 10 matchups, including the last three in the rivalry.