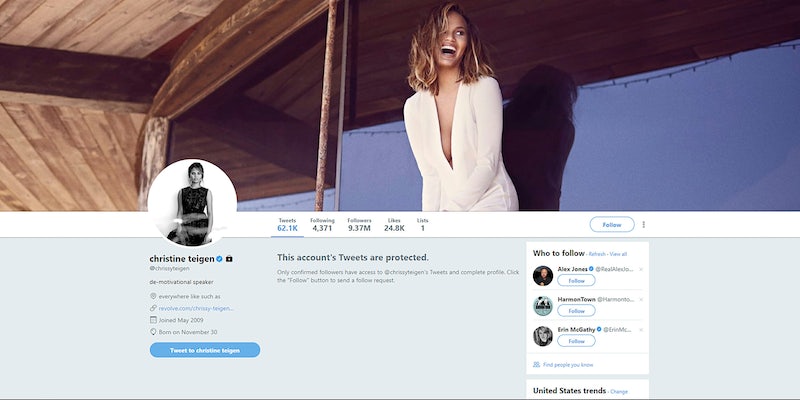 Chrissy Teigen and John Legend go to war against Pizzagate

As the clock crept toward midnight on Dec. 31, Chrissy Teigen and John Legend spent hours embroiled in a Twitter battle with a woman who accused them of taking part in the debunked Pizzagate pedophile ring.

The accusations came from Liz Crokin, a self-proclaimed “investigative journalist” dedicated to exposing sex trafficking. In a now-deleted tweet, Crokin posted several photos of Teigen and Legend’s 1-year-old daughter Luna dressed as Alice in Wonderland, a hotdog, and a pineapple, alleging that the costumes all relate to the human trafficking ring posited in the 2016 Pizzagate conspiracy theory.

Pizzagate emerged during the 2016 presidential election; supposedly, a pizza restaurant in Washington, D.C., called Comet Ping Pong served as the hub of a child-sex ring supported by Democratic elites such as Hillary Clinton and John Podesta. Proponents of the theory claimed to have combed through Podesta’s emails after they were made public by WikiLeaks and discovered codewords that referred to the pedophile ring—codewords that apparently matched the costumes worn by Luna.

Crokin, who at the time of her posting was verified on Twitter, received dozens of affirmative replies from her 52,000 followers. Teigen posted screenshots of Crokin’s original tweet and its replies on her own Twitter, writing, “The fact that there are people with these…thoughts…is really scary.”

Crokin responded to Teigen with a diluted accusation, writing that she and Legend “run in circle with people who rape, torture & traffic kids.” Legend then chimed in, quoting Crokin’s tweet and writing, “You need to take my family’s name out of your mouth before you get sued.”

You need to take my family’s name out of your mouth before you get sued. https://t.co/bPTwiBAs97

To an outsider, Pizzagate seems to be little more than a batshit crazy, Alex Jones-esque conspiracy theory (it should come as no surprise that he’s expressed his support for it in the past). But the theory has festered for the past year in the farthest corners and deepest trenches of the internet. Twitter user @alexandraerin thoroughly explained this phenomenon in a massive thread, showing how, when faced with concrete evidence that should clearly disprove their theory, these conspiracists simply “tack a modifier onto their beliefs to account for it, taking them deeper.”

If you thought the silly nonsense of "pizzagate" reached its nadir when someone invaded a pizza restaurant with an assault rifle demanding to see its (nonexistent) basement and after that it must have died down… it didn't.

Instead, it got weirder.

All of this means that charming, well-intentioned celebrities like Chrissy Teigen will continue to be subject to raving internet conspiracy theorists. The Sports Illustrated model made her Twitter private in the wake of the dustup, muting and blocking her accusers. The one upside: Teigen, Legend, and their fans successfully petitioned Twitter to remove Crokin’s blue verification badge.

Teigen reflected on the ordeal Sunday night: “It is INCREDIBLY weird to be two (semi) normal, ridiculously boring human beings who literally make food, watch tv and clean up dog barf in any kind of off time and then be suddenly accused of being in Hollywood’s hottest pedo ring,” she wrote. “What a year what a year, 2017.”