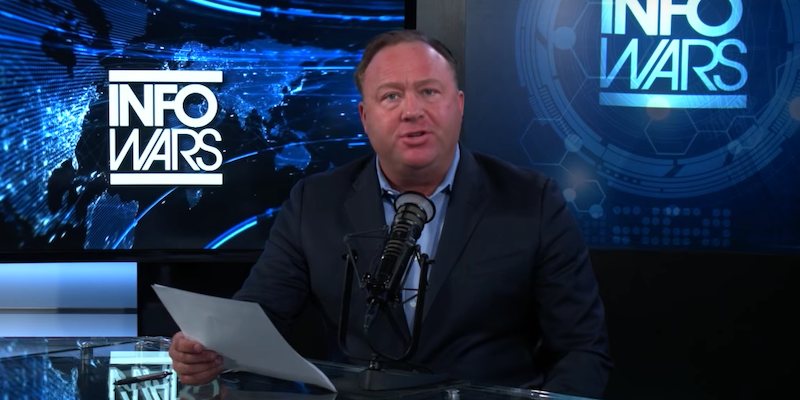 Alex Jones apologizes for ‘Pizzagate’ perpetuation, but the narrative rings on

Some are still convinced of a conspiracy.

Some apologies come too little, too late. Others, like the one delivered by Infowars‘s Alex Jones on Friday, arrive full speed ahead with enough momentum to spark another fire.

On Friday, Jones issued a written and recorded statement apologizing for perpetuating Pizzagate, the conspiracy theory revolving around a Washington D.C. pizza parlor that theorists allege to be a front for a child sex-trafficking ring. The theory also connects the parlor to former Democratic presidential candidate Hillary Clinton and her former campaign chairman John Podesta.

In his statement, the conspiracy theorist apologized directly to Comet Ping Pong pizza shop owner James Alefantis for inflating the theory, which resulted in a gunman from North Carolina storming the shop in December and allegedly firing at least once in an attempt to self-investigate the false claim.

“I made comments about Mr. Alefantis that, in hindsight, I regret, and for which I apologize to him … We relied on third-party accounts of alleged activities and conduct at the restaurant. We also relied on accounts of reporters who are no longer with us,” Jones said. “To my knowledge today, neither Mr. Alefantis nor his restaurant Comet Ping Pong, were involved in any human trafficking as was part of the theories about Pizzagate.”

In his apology, Jones said that Infowars backed away from the claims in December, and it removed all recordings and references to the pizza parlor and Alefantis from the website and social media channels.

Despite Jones’s seemingly genuine retraction, the Pizzagate conspiracy came to a head on Saturday when dozens of people from across the U.S. gathered outside the White House, demanding an investigation of the theory.

The leader of Saturday’s protest, David Seaman, declined to speak with the Washington Post about the demonstration, calling the paper “fake news” and allegedly screaming and swearing at the reporter.

Casey and Danielle travelled from Jacksonville for Pizzagate rally, say Wikileaks got them into it. Very into it: "This is all we do." pic.twitter.com/7YofPT9kyc

Kori Hayes, the man pictured above with his family in matching Pizzagate T-shirts, told the Post that Infowars is “the only place you can get the news nowadays where it’s not opinion,” but he wasn’t dissuaded by Jones’s apology.

Holding a flier listing “pedophile code words and symbols” found at Comet Ping Pong, Hayes said, “This paper in my hand is at least enough for an investigation.”