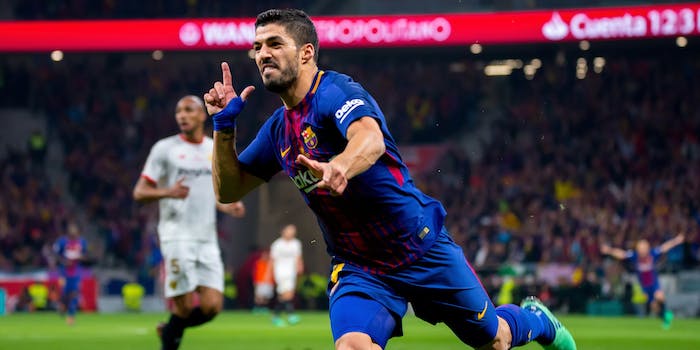 How to watch Barcelona vs. Real Sociedad for free

Barcelona's close to another La Liga title. Can they get closer Saturday?

FC Barcelona, the reigning La Liga champions (and winners of seven titles in the past decade), are poised to do it again. Their 2-0 victory over Atletico Madrid on April 6 took them one crucial step closer to locking up the 2018-19 title, and the coronation could come in the next few weeks. If that’s to change, it’ll have to start with this Saturday’s match against Real Sociedad, a solid if not spectacular Spanish side. It’s the first of three league matches in eight days for Barcelona, preceding their marquee matchup with Liverpool in the UEFA Champions League semifinals. Here’s what you need to watch Barcelona vs. Real Sociedad online for free.

Each of the following services carries beIN SPORTS, providing a one-week trial and therefore an easy way to watch Barcelona vs. Real Sociedad for free.

Barcelona vs. Real Sociedad: Why It Matters

For Barcelona fans, it’s a chance to watch the team as currently constituted in the friendly confines of Camp Nou. Lionel Messi, now in his 30s with no signs of slowing, is on another goal-a-match clip this season, Luis Suarez continues to be a reliable scoring source, and the pickup of rugged Chilean midfielder Arturo Vidal has added additional veteran stability to the squad (plus the entertainment value he brings with his motor and his mohawk). Real Sociedad, currently 10th in the La Liga standings, is one of the better sides remaining on Barca’s La Liga schedule. Captained by Spain national team veteran Asier Illaramendi, American fans will also recognize Adnan Janujaz, who spent five seasons featuring at Manchester United before moving to La Liga in 2017, and Hector Moreno, a mainstay of the Mexican national team, rumored to be moving to MLS for Inter Miami’s inaugural 2020 season.