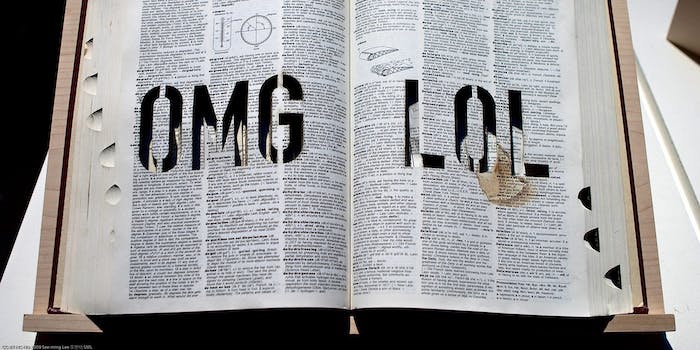 Text acronyms are the language of the internet, TBH. If you aren’t living with a #teen or scrolling through Snapchat and Twitter, though, it’s easy to get confused with all the new terms being casually tossed around online.

It doesn’t help when gibberish meme terminology like “who is she” and “BIG MOOD” become common vernacular overnight. What does SMH mean when it’s next to IDC? And where to even begin with LMAO SMDH?

You might’ve been able to keep up once upon a time, back when you were using AIM and had to let someone know you’d BRB and to PC4PC while you grabbed a snack. But there’s a whole new glossary of terms you should be familiar with, whether you’re a noob or a parent trying to decode the youths around you. Here’s what you need to know (and some GIFs to help along the way).

(All images from giphy.com.)

The most popular text acronyms

SMH is used when someone did or said something that you don’t approve of whatsoever. Just like your friend Debby, when she says she loves her boyfriend but then she goes and sleeps over at another dude’s’ house. SMH, Debby. If you need a little more emphasis, go with SMDH, “shaking my damn head.”

When things just don’t go the way they were planned, sometimes you’re allowed to wallow in your sorrows. Using FML in a conversation is totally acceptable for almost all unfortunate situations in life. Oh, you left your keys in your car? FML. The person you have a huge crush on won’t text you back? FML. You dropped your ice cream cone? Major FML.

If you want to make it clear you’re voicing something from your perspective—whatever that might bring—bring an IMO into the mix. Alternately, you can use an IMHO for “in my humble opinion,” even if what you’re about to say doesn’t necessarily come off as humble.

Everyone experiences FOMO. It’s inevitable now that every status update points out what we’re missing out on. A person can experience FOMO when their two best friends go out to a nice dinner but they have to stay home and catch up on work. It’s the worst.

IDGAF is one of the most intense acronyms used across the internet. It is short and to the point, and it’s also versatile.

Being honest is a great quality to have, but TBH is smug. When someone uses TBH, they are saying something that typically goes against the popular opinion of the party it’s directed to. Examples can be similar to “TBH I really hate tacos,” or “I don’t think I’ll be coming to your party, I’d rather stay at home TBH.”

7) BAE: Before anyone else

Though “bae” wasn’t originally a text acronym, the internet quickly found an alternate meaning for this shortened term of endearment. Even though a lot of people are repulsed by the word BAE, the meaning is pretty cute. If used correctly, it means that the person deemed as your BAE is “before anyone else.” Food, attractive celebrities, and TV shows can also be bae. Basically, anything you love more than most other things.

8) OOMF: One of my followers

The term OOMF is mostly used on Twitter to refer to one of your followers. It’s properly used as a sneaky way to compliment your crush or say explicit things without getting too personal or tagging another user. Twitter users will say things like “OOMF is looking good today,” or “I really wish me and OOMF hit it off.”

Using WBU is a lazy way of asking what someone is up to or what they are thinking. Typically, it is seen in a late-night text from a fuckboy responding to your “what’s up,” query with a casual “NM (not much), WBU?”

Shortening the phrase “I don’t know” is probably the most common text acronym. And when used it can either mean you actually are not informed of something or you don’t care to put any thought into it.

A standalone LMAO, especially when capitalized, is the loudest brand of internet laughter. It either implies very real actual laughter or internalized, virtual laughter. LMAO can also be seen in its simplest form in this meme with a fake alien saying “ayy lmao” in a sarcastic tone. (There’s also LMFAO, which has an extra adjective in the mix for emphasis, and survived its adaptation by the dance music duo of the early 2010s that glorified “party rockin’.”

WTF is an acronym laced with major sass, disbelief, and anger. If you ever receive a text or message with this acronym, you must have done something that really confused or made someone angry. (There’s also WTAF, with the A standing for “actual” and bringing extra emphasis.)

Just like WBU, the text acronym WYD has fuckboy written all over it, especially when it slides into your DMs unsolicited at 2am. But other than those all-too-common late-night check-ins, WYD is also a practical way to check in with your friends using a minimal three characters.

To be continued has always been used in corporate settings, formal invitations, or sometimes at the ending of movies indicating a sequel. TBD can also be used to keep people in suspense about important information like a decision someone is about to make. TBD can also be said aloud to talk about someone’s plans for the weekend.

ICYMI, or “in case you missed it,” is one of the more useful standalone text acronyms that doesn’t always require much additional context. Anytime you genuinely want someone to be aware of anything they may have missed, give this abbreviation a try. You’ll typically see it followed by a colon. For example, “ICYMI: [insert a news article you want to share/picture of your dog doing something weird/a screenshot of that out-of-the-blue text from your crush].”

As a one-acronym response to end all one-acronym responses, “idc” is a petty but effective winner. You can also throw in a casual IDC when debating trivial things via text. For instance, “Wanna order Chinese or Indian takeout for dinner? IDC.” You can even string your IDCs together, in order to indicate just how little you truly care. IDCIDCIDCIDC.