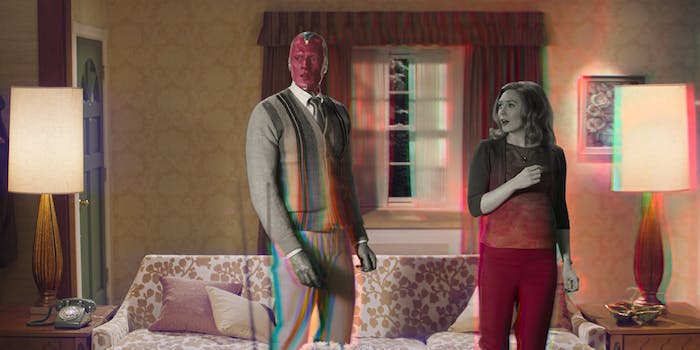 Diehard comic book fans and casual viewers have different ideas of what the show should be.

Over the last eight weeks of watching and writing about WandaVision, I’ve noticed a drastic divide among the show’s audience.

Marvel projects always draw a diverse crowd, ranging from expert fans to casual viewers with zero knowledge of the comics. The franchise caters to both camps, with WandaVision as an offbeat but effective example: an entertaining blend of MCU lore, sitcom pastiche, and emotional drama. But it also highlights a chasm in viewer expectations, as proven by the director effectively apologizing for the finale in advance.

Speaking to Entertainment Weekly, Matt Shakman (who directed all nine episodes) said, “I know there are so many theories out there; there will be a lot of people who will no doubt be disappointed.” This quote spread quickly among geek blogs, where predictions and explainers make up the bulk of WandaVision coverage. The overall message was: Lower your expectations for something like a Mephisto cameo. Comic book references may be a key element of the show, but they’re not the driving force of the story.

In the same interview, Shakman emphasized that this is a story about grief. “Hopefully people will find that the finale is surprising but also satisfying,” he said.

This balance of commentary—explaining the show’s most obvious themes while lowering expectations for fan theorists—reminded me of an earlier interview with WandaVision showrunner Jac Schaeffer. Three episodes in, she responded to fandom complaints of a “slow” introduction.

“I understand it,” said Schaeffer. “I was worried about that, especially because Marvel fans show up with an expectation, and we are bucking that expectation quite a bit… But I think that anyone who invests in the show will find satisfaction. We do take the show to places that a traditional Marvel fan will enjoy.”

This was an early sign of the divided response, with mainstream TV critics praising the same episodes that some MCU fans labeled “slow.” With a typical MCU movie, everyone comes in with similar expectations. But with WandaVision, those expectations vary depending on whether you see it as an MCU product or a character-focused dramedy. Every show has its lovers and haters, but WandaVision fans disagree over what the show is meant to be.

The first three episodes set an elaborate scene: a time-jumping sitcom pastiche, reintroducing two MCU heroes in an eerily cheerful suburban fantasy. It skips between different decades with different atmospheres and aesthetics. That’s not “slow” by any stretch of the imagination; it’s a lot of material to pack into 90 minutes.

WandaVision is actually much lighter on its feet than Marvel’s Netflix shows, which often felt overstuffed and laborious. But Schaeffer’s response is interesting. She doesn’t mention pacing; she talks about the expectations of “traditional Marvel fans,” i.e. viewers who enjoy action scenes and comic book lore. And indeed, there’s plenty of that stuff in later episodes. The introduction just leans more into vintage sitcom references, appealing to TV nerds rather than comic book nerds—a significant but less vocal segment of the target audience.

Obviously, you can’t easily sort every WandaVision viewer into one camp or the other. Many comic book fans, myself included, appreciate the Marvel references while enjoying the story on its own terms. But the idea that the showrunner needs to placate “traditional Marvel fans” is dispiriting. It paints a picture of creators sneaking original storytelling in between nerdy callbacks, which is why—for me, at least—WandaVision became less interesting once it fully embraced MCU lore.

Of course, this genre-savvy approach has been hugely successful for Disney. The Russo brothers (Avengers: Endgame) started out by “Honest Trailer-proofing” their first Marvel movie, determined to avoid the kind of inconsistencies that YouTube critics like the Screen Junkies love to hate. That’s why the MCU inspires passionate loyalty among fans who prioritize Easter eggs and predictions, while fans who prefer coherent emotional storytelling are often left disappointed.

WandaVision‘s biggest Marvel tie-ins have been graceful: Monica Rambeau‘s origin story, Wanda’s revised superpowers, the inclusion of crossover MCU/sitcom stars Kat Dennings and Randall Park. They offered fuel for fandom speculation while also being comprehensible to normie viewers, woven into Wanda’s emotional arc. But if you’re convinced the finale will focus on a flashy revelation from Mephisto or Mr. Fantastic (as opposed to, say, Wanda coming to terms with her trauma), then yes, you’re probably doomed to disappointment.