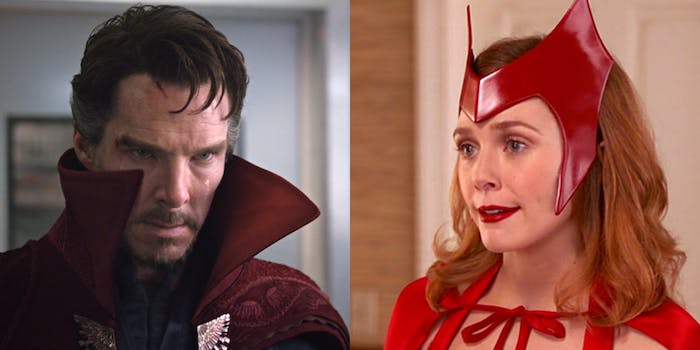 What ‘WandaVision’ and ‘Doctor Strange’ say about magical gender roles

Scarlet Witch's power is all about chaotic emotion, while Dr Strange is an academic elitist.

As Scarlet Witch embraces her reality-bending powers, WandaVision highlights a recurring contrast between male and female magic-users. While Wanda Maximoff’s role is all about emotional upheaval and uncontrolled outbursts of power, her male counterpart (and future co-star) Doctor Strange develops his magic through rigorous academic training. These gender roles are a common theme when portraying witches and wizards, buying into sexist frameworks while also—in this case, anyway—fueling a compelling journey for our female lead.

Like Marvel comics canon, the MCU is now complicated enough that new creators can rewrite problematic choices made by their predecessors. In Wanda’s case, her origin story was mangled by Joss Whedon‘s Avengers: Age of Ultron. This film erased her Romani heritage and introduced her as a vengeful waif who gained her superpowers via torture and experimentation. The sequels put her in a tertiary role, so WandaVision is her first chance at serious character development—and the first time she’s been written by a woman.

WandaVision examines Wanda’s trauma through a sitcom fantasy lens, exploring her desire for a stable family life. She creates a dreamworld to escape her grief, but she can’t avoid her gritty backstory forever. Episode 8 reveals that instead of receiving magic from an outside source, she actually had some kind of innate ability all along. But without formal training, she had to figure things out by herself.

After fighting alongside the Avengers for years, Wanda achieved her full potential in response to Vision’s death. This puts her in a familiar mold for female characters with awe-inspiring powers: A young woman who doesn’t understand her own strength, and is pushed to breaking point by emotional turmoil. In the right hands—for instance, the movie Carrie—this can be a powerful and evocative story. But it can also overlap with the “Born Sexy Yesterday” trope, where a woman’s superpower is undercut by her own helplessness —either because she’s characterized as childlike, or hopelessly traumatized, or an amnesiac with no knowledge of her abilities. We see this constantly in Joss Whedon’s work, from Dollhouse to Firefly‘s River Tam, to his reimagining of Scarlet Witch.

Scarlet Witch echoes familiar ideas about feminine magic, both in pop culture and in historical views of Western witchcraft. Her magic is “wild,” rooted in a sense of frustration and injustice. WandaVision‘s plot hinges on a scene where a grief-stricken Wanda learns that a powerful man (SWORD’s Director Hayward) has stolen her lover’s body, prompting her to create a new reality. It’s practically a fairytale, improving on a thinly-drawn relationship in the movies. And it provides a stark contrast with the MCU’s other human magic-user, Doctor Strange.

Played by a rather typecast Benedict Cumberbatch, Doctor Strange is a snobbish, perfectionist ex-surgeon who approaches magic with academic zeal. He learns through a ritualized hierarchy of martial arts-style training, performing spells by drawing complex sigils in the air. Meanwhile Scarlet Witch’s magic is either depicted as wild blasts of red energy, or as a means of sneakily manipulating people’s thoughts and emotions. She is self-taught.

This contrast is one of those blatantly gendered tropes that can potentially be sexist, but can also examine how men and women are shaped by society. After all, witchcraft stories are often about marginalized women striking back against mundane power structures. Viewed from a more critical angle, Doctor Strange is an arrogant white guy who co-opts an implicitly “foreign” type of magic and declares himself the Sorcerer Supreme. Of course, his film buys into this by portraying him as uniquely impressive, outstripping more experienced magicians like his sidekick Wong. Both Doctor Strange and Scarlet Witch are rooted in cultural appropriation, framed as outsiders compared to the militaristic America Avengers.

Doctor Strange and Scarlet Witch are in many ways the archetypal witch/wizard duo. He’s a self-absorbed elitist who surrounds himself with mystical props and ancient texts, while she draws power from her emotions and experiences. And although Scarlet Witch may be “more powerful” than Doctor Strange, she harms people because she doesn’t understand her own strength. WandaVision‘s eighth episode introduces an alternative option in the form of Agatha Harkness‘ all-female coven, whose terminology echoes Doctor Strange’s magical knowledge. But they’re currently a footnote in Wanda’s story of trauma and empowerment.

The MCU’s sprawling creative team probably didn’t think deeply about witchcraft before now. Wanda and Doctor Strange’s characterization trickled down through decades of comics canon, influenced by Romani witch imagery in one case, and vaguely racist 1970s psychedelia in the other. Their powers and personalities were reshaped to fit modern blockbuster expectations. WandaVision understands how to reframe its protagonist in a thoughtful light, but what will Wanda look like as the co-star of Doctor Strange and the Multiverse of Madness? We’re probably in for another CGI light show, but hopefully the writers are at least somewhat aware of the politics behind her role.