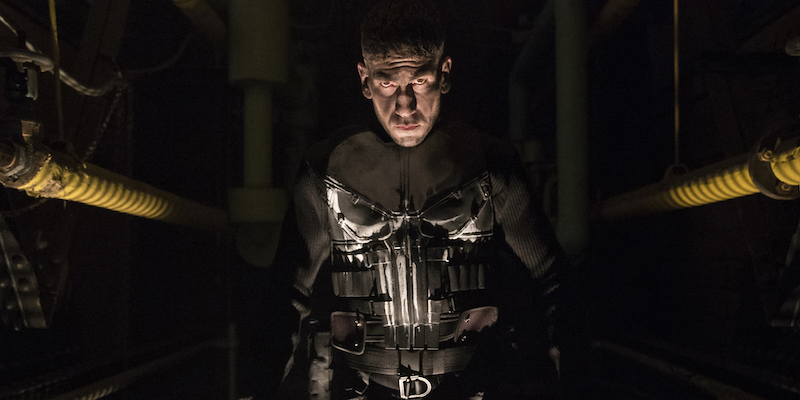 Photo via Marvel's The Punisher/Netflix

Marvel’s ‘The Punisher’ is dull and politically flawed

This review contains no spoilers for Marvel’s The Punisher.

Marvel‘s The Punisher is a work of artistic cowardice. Faced with the controversial topics of gun violence and veteran life in the U.S., it tries to find a noncommital middle ground. Instead of portraying Frank Castle as an interesting monster, it tries and fails to make him relatable.

Jon Bernthal was a highlight of Daredevil‘s second season, introducing Castle as a trigger-happy vigilante. He’s still perfectly cast in The Punisher, but the material doesn’t live up to Bernthal’s performance. The show is tedious and politically muddled, and even if you don’t care about politics, it doesn’t include much actual punishing. Bogged down in boring dialogue and reruns of Castle’s backstory, it’s a frustrating disappointment for fans of the character. Like several other Marvel/Netflix shows, it feels like they decided on a 13-episode runtime and padded a shorter story to fit.

Daredevil had the right idea when it cast Frank Castle as a villain. He’s essentially a mass shooter, so I had some qualms about a Punisher adaptation in 2017. Would it glorify his ruthless moral code? As it turns out, The Punisher went too far in the opposite direction. Instead of reveling in the Punisher’s brutality, it tones him down. It tries too hard to make him seem vulnerable, and bizarrely, it gives him too many friends.

As in the comics, Micro acts as tech support to Castle’s muscle. Then there’s Micro’s wife, Sarah, who strikes up an odd but genuine friendship with Castle. He also has heart-to-hearts with his old military buddies Curtis (Jason R. Moore) and Billy Russo (Ben Barnes), and gets close to Daredevil‘s Karen Page.

The Punisher is meant to be a demonic force of relentless violence, but this version is indistinguishable from your average gritty action hero. The show conflates his story with other traumatized veterans in Curtis’s therapy group, removing what makes the character unique. It’s a pity, because Bernthal shines on the rare occasions when Castle really goes berserk. What, exactly, is the point in humanizing this character? Marvel already covered that territory with morally ambiguous heroes like Daredevil and Tony Stark.

Showrunner Steve Lightfoot (Hannibal) doesn’t seem to understand what makes the Punisher interesting. Concerned about glorifying violence—a key criticism of any Punisher story—the show switches focus to its slow-moving crime storyline. Yet The Punisher doesn’t actually disavow Castle’s actions. By framing him as a better person than the two-dimensionally evil villains, it tacitly endorses the idea that America needs a good guy with a gun.

In the comics, Castle’s dead family are the catalyst for his transformation into the Punisher; not his sole motivation. Their deaths unmoored him from society, but he already had a kernel of violence in his heart. The Netflix version takes another route, almost acting like an origin story. Castle is consumed by grief, flashing back to sweet moments in bed with his wife, or playing guitar with his kids. He could be anyone.

This might have been an interesting new interpretation of the character, except Frank Castle’s wife isn’t a human being. She’s a bland caricature of the Dead Wife trope; a stereotypically feminine housewife in a floral dress, welcoming her husband home from war. She has less characterization than the protagonist of a yogurt commercial, and we learn nothing about their relationship. Of course, the show could have used this for some cultural commentary about gender and marriage. But it didn’t.

Marvel’s take on the Forever War

The Punisher has a complicated relationship with the U.S. military, both in the comics and in real life. Introduced as a Vietnam veteran, some storylines suggest that military service unearthed the black pit of violence in his soul. He’s the dark reflection of Captain America, another soldier with a staunchly individual moral code.

To some fans, Frank Castle is a hero who takes action when the law fails to do what’s necessary. He’s popular with soldiers and cops, to the point where the Punisher’s skull logo appeared as a “Blue Lives Matter” symbol on Kentucky police cars, and was famously worn by American Sniper‘s Chris Kyle. In his autobiography, Kyle explained his admiration for the character: “He righted wrongs. He killed bad guys. He made wrongdoers fear him.”

Punisher co-creator Gerry Conway is disturbed by this attitude. “In my mind he’s not a good guy,” he told Time magazine. “He never asks, ‘Am I doing the right thing?'” Describing himself as anti-war, Conway filed for conscious objector status during the Vietnam draft. He originally conceived the Punisher as a throwaway Spider-Man villain.

2017 is a fruitful time for a character like Frank Castle. America’s post-9/11 wars are confusing, controversial, and distant. Most Americans don’t know anyone in the military, and veterans can’t get access to proper support. Then there’s the burgeoning problem of white nationalism among the troops, feeding into the fetishistic military imagery you see at neo-Nazi events like Charlottesville. Oddly enough, The Punisher does a better job of handling these issues than exploring its main character, giving a variety of viewpoints to veterans.

Everyone in The Punisher is touched by war, mostly in ways that remain invisible to the civilian population. The villains are government suits who direct morally bankrupt operations from afar. Micro leaked a torture video and paid the price. Castle, Russo, and Curtis forged a brotherhood while serving together in Afghanistan, and emerged with radically different civilian lives. Castle is a mass shooter, Russo is a snappily dressed military contractor, and Curtis leads a veteran support group. That’s where we meet 25-year-old Lewis Walcott (Daniel Webber), perhaps the most interesting character in the show.

Walcott can’t adjust to civilian life. He has more support than many of his peers—a home, a therapy group, a father who loves him—but it’s not enough. The army shaped his identity as an adult, leaving him with PTSD and no idea what to do next. Webber’s performance is intense and sometimes hard to watch, as Walcott gradually goes off the rails.

So, is The Punisher worth it?

The Punisher has more in common with Iron Fist than Jessica Jones or Luke Cage, although I wouldn’t insult Punisher with a direct comparison. Where Iron Fist was painfully incompetent, The Punisher is just slow and overly long, failing to grasp the power of its title character. It also suffers from a recurring problem in Marvel’s Netflix franchise: uninspired crime writing. Madani’s investigation was simple yet hard to follow, often seeming to “discover” something we already knew.

Netflix released all 13 episodes to critics, and despite strong performances from Bernthal, Walcott and Moss-Bachrach (Micro), it was a slog to reach the end. I found myself thinking back to Person of Interest, which did a better job with similar material. Its main characters were an ex-CIA vigilante and his hacker partner, battling shadowy enemies in the military-industrial complex. Even in the framework of a formulaic CBS crime show, it was more satisfying than Marvel’s attempt at serious long-form drama.