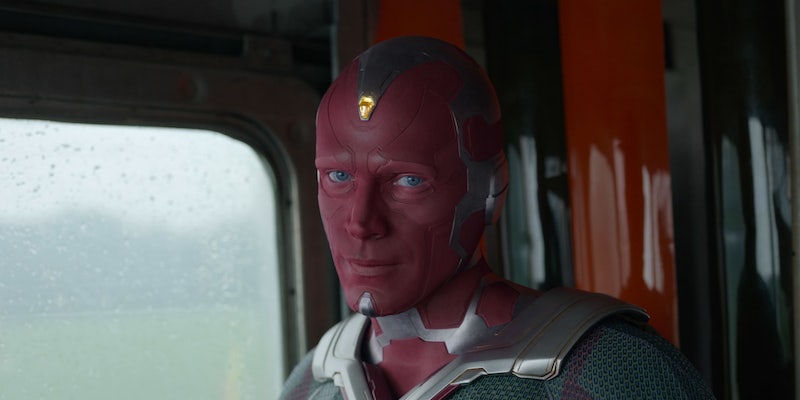 A line about grief is dividing ‘WandaVision’ fans on social media

'What is grief, if not love persevering?' Vision asked, sparking hearty debate and memes.

A single line from last week’s WandaVision is striking a chord with fans, but it’s not the kind of snappy Marvel reference you might expect.

In a scene set shortly after Avengers: Age of Ultron, we see Vision comforting Wanda Maximoff in the wake of her brother’s death. “What is grief, if not love persevering?” Vision says gently. This might have sounded overly flowery and sentimental from another character, but it’s perfect for Vision’s sensitive personality and Paul Bettany’s acting skills.

This line encapsulates a central theme of the show: Wanda struggling to deal with her trauma by surrounding herself with a happy, domestic illusion. Her grief is overwhelming because she loved Pietro and Vision so strongly.

But like so many popular things on Twitter—especially in a Marvel project—this line also inspired an astounding amount of discourse. The jumping-off point was a viral tweet where someone suggested that other screenwriters must be jealous of whoever wrote this episode. (That would be writer Laura Donney, collaborating with the rest of the WandaVision writers’ room.)

In turn, that viral tweet spawned its own parodies:

Originally a straightforward and sincere compliment toward a single line of dialogue, this opinion became bizarrely controversial. Well, not that bizarrely, if you’re familiar with a certain kind of Marvel backlash.

Thanks to the ubiquity of Marvel fandom, some people get annoyed by the constant deluge of Marvel stan posts complimenting every element of the franchise. It’s the new version of people angrily replying “Read another book!” to any viral post that uses Harry Potter as a political reference.

You can see where the complaints are coming from. Disney has turned the MCU into an inescapable cultural presence, but the franchise generally isn’t very interesting from an artistic perspective. When a fan goes viral for praising the cinematography of a movie like Avengers: Endgame, film buffs see it as a depressing example of Disney shoving high-quality indie cinema out of the public consciousness. This also explains the somewhat fabricated “rivalry” between Martin Scorsese and superhero films.

The opposing argument is that these Marvel critics are just snobs, and the MCU is popular because it engages with universal themes. Unfortunately, this circular debate shows no sign of slowing down because because both sides are set in their opinions. Also, a lot of people are currently trapped indoors under stressful circumstances, exorcising their personal demons through pointless Twitter arguments.

The fact is that while some viewers found the “love persevering” line to be trite and unoriginal, others clearly found it very moving. And art is subjective.

Marvel fans have spent a long time with these characters, and WandaVision is a story about mourning the death of a loved one. We’re meant to engage with Wanda in this moment, as she’s forced to relive a terrible loss. When Vision asked, “What is grief, if not love persevering?” it resonated with many people’s own experiences, drawing together disparate strands of WandaVision‘s depiction of trauma. So while this line isn’t a brand new concept, it doesn’t need to be. It articulated an intense, recognizable experience that a lot of people couldn’t put into words themselves.

The divisive response also demonstrates how Twitter pits people against each other. Under other circumstances, some viewers would love this episode, some wouldn’t, and that would be that. But Twitter is designed, algorithmically and culturally, to make people post strong reactions to trending topics. Since WandaVision is a popular show with a lot of Very Online fans and haters, this one line of dialogue sparked a factionalized argument that played into people’s pre-existing beliefs about Marvel media in general.

And that’s how we ended up with people mocking some sincere, heartfelt reactions to a story about grief.