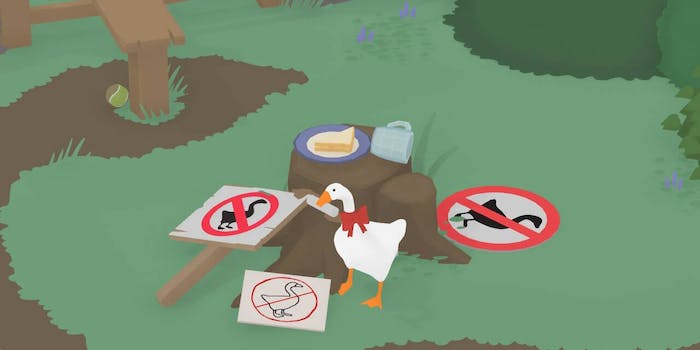 You cannot escape the goose.

Untitled Goose Game quickly took over the internet following its release on Sept. 20, 2019. If you’ve picked up this goofy puzzle game, chances are you’ve struggled to put it back down. Nearly everyone who’s played the House House release is obsessed with it, sharing stories of their exploits as a slightly bothersome goose irritating the inhabitants of an English village.

Untitled Goose Game has a very simple premise. The game puts players in control of an irksome goose as it honks, flaps, and steals its way through the game’s setting in a simple English village. As players accomplish objectives—gently irritating the village inhabitants—they can unlock new areas of the village to traverse.

As popular things on the internet are want to do, Untitled Goose Game quickly spawned memes. Then, as it gained a robust following, the memes evolved. More than a year after its release, the internet is still awash with goose-themed memes, paying homage to the simple, silly game that everyone is playing.

Many of the first Untitled Goose Game memes focused on the goose at the center of the story and how it was evil—in a very likable and cute way.

Conversations around Untitled Goose Game picked up online after model and author Chrissy Teigen jumped on the bandwagon. Once she joined the ranks of the mildly irritating goose army, there was no turning back.

Even before Teigen was on-board, hundreds of players were sharing their in-game experiences through amusing posts and clever memes. 2019’s most unexpectedly popular game even spawned fan art.

The reach of the goose has been spreading, unchecked, for months. In 2019, popular games like Borderlands 3 and Call of Duty: Modern Warfare took a backseat to a game starring a goose. That’s the internet for you.

Gradually, the game’s titular goose was worked into old meme formats and references to Vine. You cannot escape the goose. The goose is everywhere.

There’s even a goose version of the ‘woman yelling at cat meme’—with the goose in place of the cat at the dinner table.

And the goose as the ‘stonks’ businessman. (Honks, not stonks!)

Here’s a recreation of the boy running with a knife viral video:

5) The goose in song

A few people have even been on the hunt for the game’s perfect soundtrack. “Juice” by Lizzo and “Misbehavin'” from The Righteous Gemstones are both contenders.

6) Real-life geese get in on the fun

Real-life geese have seemingly taken the game’s premise as a challenge, as evidenced by this recent news story of a goose smashing a taxi window.

Or this goose, whose dangerous reputation precedes him. You’ve been warned.

He might not look the part, but this seagull is channelling flawless goose energy.