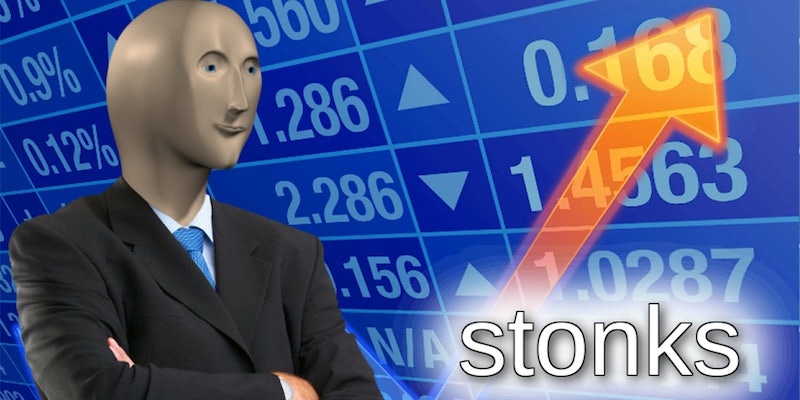 The Stonks meme is back—and it’s weirder than ever

The price of this stonk is through the roof!

A little over two years ago—June 5, 2017 to be exact—the original “Stonks” was posted by the Facebook page Special Meme Fresh. The image, ironically enough, uses a stock photo of a businessman in front of a representation of the stock market. The man’s head has been replaced with the image of “Meme Man” aka “Mr. Succ,” which is its own surreal meme, and the page’s mascot. The word “Stonks,” an intentional misspelling of the word “Stocks” was placed below a rising orange arrow.

It’s a surreal image and one that was posted with no further comment, allowing users to interpret it however they wished. Over the next year or so, the image cropped up in various places, including Reddit, Imgur, and even YouTube.

I’ll take your stonks. from memes

“Stonks” was a bit of wacky, weird fun, but as all memes do, it eventually faded away.

However, in the past few weeks, it seems to be making a bit of a comeback, especially on Reddit. The meme’s resurgence is fueled mainly by a post in the r/goodfaketext subreddit. The post shows a conversation where someone is begging their ex-lover to take them back and unintentionally inserts the Stonks meme.

From there Redditors began using the meme to make fun of people who thought they were making good investments, but clearly had no idea what they were really doing.

Smh out loud from dankmemes

People have also been making fan art of the original image.

2 terabytes of stonks memes from memes

On Tuesday I have exam, wish me luck from memes

With the meme making such a sudden and surprising comeback, the time to invest in this stonk is now.