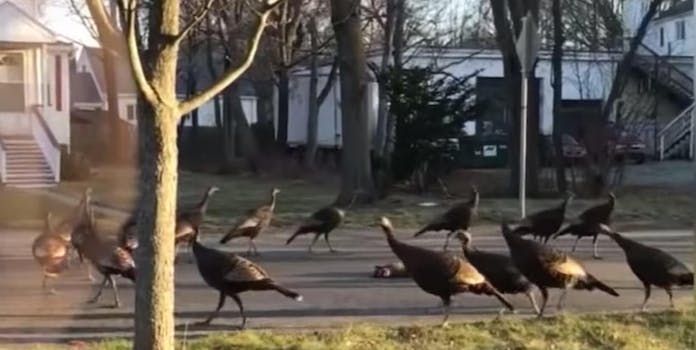 Are they trying to raise the dead?

Sometimes you’ll see something on Twitter that just cries out for an explanation, and this now-viral video of turkeys circling the corpse of a cat is certainly one of them.

turkeys walking in a circle around a dead cat in the middle of the road pic.twitter.com/o2ZqtJuNV4

The video, posted by user @haunterhaha, received over 67,000 likes and lots of reactions.

‘God: ‘Welcome to eternity my son. You’ve lived a good life. If you have any questio-‘

Me: ‘WTF was up with the turkeys and the dead cat?!’

Speculation included the turkeys being a coven of witches.

These turkeys are witches y'all.

sure. everything. is. fine. pic.twitter.com/RrATL1wV5I

After one hour of this, the cat will come back to life…but it won't be the same.https://t.co/bsyRPgLdSu

Or a demon summoning.

You want to summon an elder demon? That's how you get one.

satanic turkeys are a thing…

Or some other sort of cultic behavior.

Did no one tell them that this kind transmutation is a taboo in the alchemist world… smh my head.

Turkey cult? This new season of American Horror Story has peaked my interest.

A surprising number of people saw references to the Handmaid’s Tale in this video, too.

It feels like a scene from the Handmaids Tale

Blessed be the fruit

It turns out that there’s a much more mundane explanation for the ominous circle. When the video first surfaced in 2017, National Geographic ran an article explaining it, and it turns out that the turkeys are just confused as hell and trying to make sure the potential predator is actually dead.

“My guess is they are puzzled by the strange behavior of the dead or dying cat,” says Hughes, “[and wanted] to get a better look, without getting too close.” The result, he says, is a circle of turkeys—mostly females—all eyeing the potential predator’s carcass, but none of them wanting to get any closer.

Not all Twitter users are buying it, however, and remain convinced that there’s something sinister in the turkeys’ behavior.

it's a trick, call a witch hunter

Is this one of the Seals of the Apocalypse?