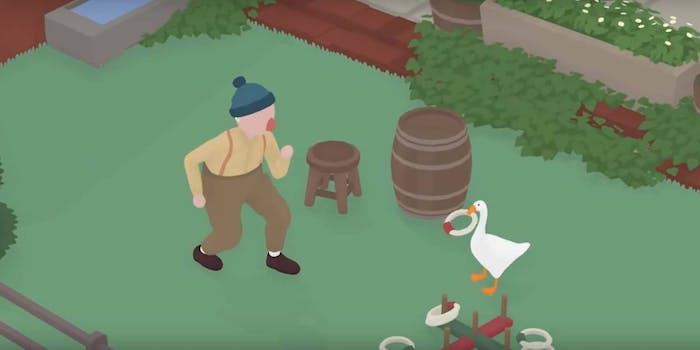 You can now buy that viral game about an annoying goose

Remember that video game where you play an annoying goose? It's finally out!

Back in 2017, a trailer appeared for a simple video game about an annoying goose. Depicting a cartoonish bird acting like a total asshole in a farmer’s garden, it captured the hearts and minds of the internet. Now, that game is finally available to buy.

Called Untitled Goose Game, it’s available on Nintendo Switch and home computers. The setting is bigger than the original farmyard teaser suggests, but the premise is still enticingly simple: “It’s a lovely day in the village, and you are a horrible goose.” Your mission is to disrupt as many people’s peaceful lives as possible, by chasing them around, stealing their possessions, and honking loudly.

Created by the Australian indie studio House House, it features a soundtrack of remixed piano music by Debussy, and something called a “dedicated honk button.” In other words, it’s one of the more offbeat games of the year, but hopefully worth the wait.