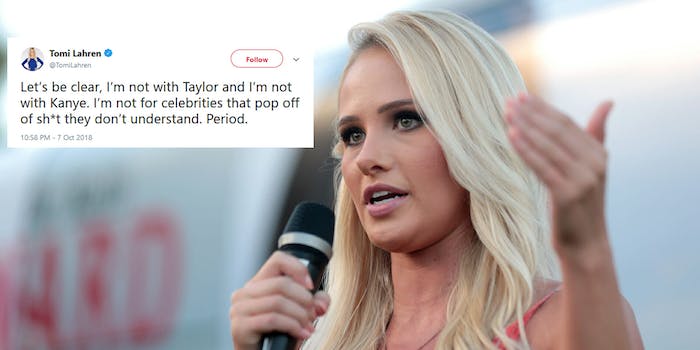 Tomi Lahren’s tweet about not supporting celebrities gets roasted

People are pointing out Trump was a celebrity.

Conservative personality Tomi Lahren waded into the debate about the political leanings of Kanye West and Taylor Swift earlier this week by saying she is “not for celebrities that pop off on sh*t they don’t understand.”

However, everyone quickly pointed out that she has been a vocal proponent of the policies of President Donald Trump, who was a reality TV star before he decided to wade into politics. And tweeted a lot about things he didn’t understand.

“Let’s be clear, I’m not with Taylor and I’m not with Kanye. I’m not for celebrities that pop off of sh*t they don’t understand. Period,” she wrote.

Let’s be clear, I’m not with Taylor and I’m not with Kanye. I’m not for celebrities that pop off of sh*t they don’t understand. Period.

As a quick refresher: West, who is meeting with Trump at the White House later this week, got a shout out from the president last month after he went on a pro-Trump rant during a taping of Saturday Night Live. His praise for the president was heralded by many conservatives.

Meanwhile, Swift wrote on Instagram that she would vote for two Democrats in the upcoming midterms—causing a surge in voter registration—which drew scorn from conservatives.

The gap in logic from Lahren not acknowledging Trump was a celebrity was not lost on people online.

Didn’t Trump do this when he was a TV star? Didn’t he ‘pop off’ regarding Obama?? How quickly we forget… https://t.co/LP98w8utpk

Says someone who supports a former TV show host. https://t.co/NVrr6enKwQ

YOUR PRESIDENT IS LITERALLY A CELEBRITY..YOU ARE SO DELUSIONAL https://t.co/w9wbBB0int

Clearly, Trump fanatics have no concept of irony. https://t.co/3u712b5YeF

So you DON'T support our President then? Wait, I'm confused. https://t.co/cVC4ZAAKFZ

We’ll just add this to the list of tweets by Lahren that have been blasted online.