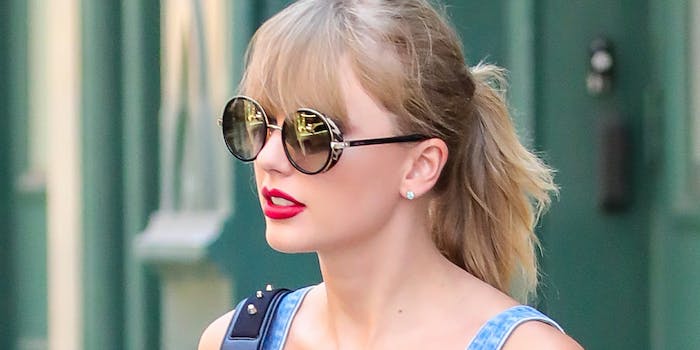 Are you ready for this?

Taylor Swift’s recent foray into politics has compelled tens of thousands of people to register to vote. Perhaps more so than political observers could have expected.

Swift—who had previously declined to share her political views, which had led many to believe she was a President Donald Trump supporter—took to Instagram on Sunday night and endorsed two Democrats for Congress in her home state of Tennessee. Really, though, Swift’s statement to her 112 million Instagram followers was a condemnation of Republican Rep. Marsha Blackburn, who is facing Democrat Phil Bredesen for an open Senate seat.

The response has been overwhelming.

According to Vote.org, via BuzzFeed, 65,000 people registered to vote in the 24 hours since Swift’s post. Compare that to the 190,000 voters that registered in all of September and the 56,000 who signed up in all of August.

Kamari Guthrie, the director of communications for Vote.org, also said that more than 155,000 people had visited the site since Swift spoke out. Compare that to the site’s daily average of 14,000 visitors.

Some have said that either Swift didn’t write the words she posted or that she didn’t actually know what she was talking about. As the Washington Post noted, one person wrote on Twitter, “This is a betrayal beyond words. Taylor Swift, you have every right to vote for the candidate you like but putting your reasons for in public, while having people who adore you on both sides, is just appalling. You’ve done a terrible thing being SJW at the wrong time.”

Even Trump said Monday that he liked Swift’s music about 25 percent less than he did before she spoke out.

Swift certainly didn’t hold back her feelings in her critique of Blackburn and the GOP agenda, saying that she’ll always vote for the candidates who believe in fighting for the progressive agenda.

“I believe that the systemic racism we still see in this country towards people of color is terrifying, sickening and prevalent,” Swift wrote. “I cannot vote for someone who will not be willing to fight for dignity for ALL Americans, no matter their skin color, gender or who they love. Running for Senate in the state of Tennessee is a woman named Marsha Blackburn. As much as I have in the past and would like to continue voting for women in office, I cannot support Marsha Blackburn. Her voting record in Congress appalls and terrifies me. She voted against equal pay for women. She voted against the Reauthorization of the Violence Against Women Act, which attempts to protect women from domestic violence, stalking, and date rape. She believes businesses have a right to refuse service to gay couples. She also believes they should not have the right to marry. These are not MY Tennessee values.”

Whether you agree with her stances, it’s hard to deny that her words didn’t have a huge impact—and they could continue to do so before the midterm elections.

“She laid it out there in a lot of words with a lot of passion, saying vote based on issues. Take a look at the candidates and make sure that you agree with candidates as opposed to look at the demographics of the candidates,” Karen North, a professor of digital social media at USC Annenberg, told ABC7.