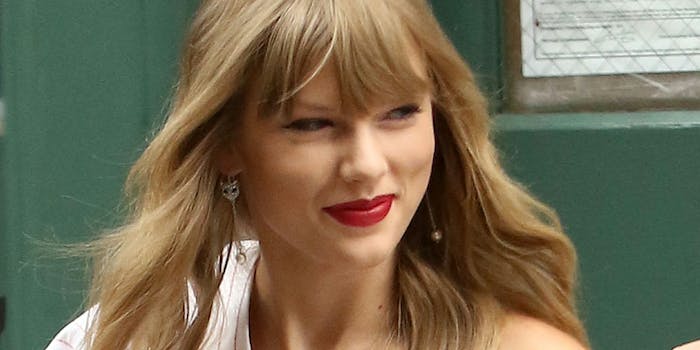 After praising Kanye, conservatives condemn Taylor Swift for getting political

“Running for Senate in the state of Tennessee is a woman named Marsha Blackburn. As much as I have in the past and would like to continue voting for women in office, I cannot support Marsha Blackburn. Her voting record in Congress appalls and terrifies me,” Swift’s post reads.

“She voted against equal pay for women. She voted against the Reauthorization of the Violence Against Women Act, which attempts to protect women from domestic violence, stalking, and date rape. She believes businesses have a right to refuse service to gay couples. She also believes they should not have the right to marry. These are not MY Tennessee values. I will be voting for Phil Bredesen for Senate and Jim Cooper for House of Representatives,” Swift said and urged her followers to register to vote as well.

“I don’t want to accuse her of this, but I don’t think she’s the only one who wrote that post on Instagram. She probably got some very bad information,” Kirk said.

“This is what I used to love about Taylor Swift is she stayed away from politics—she was all about music all about, you know, female empowerment.”

What Kirk fails to understand is that politics and political involvement are an inherent and essential part of “female empowerment.”

The political representation of women and feminist values like equal pay, access to healthcare, and reproductive rights are at a low under President Donald Trump’s administration, as are voting rights for underrepresented populations and rights for LGBTQIA individuals.

Swift has repeatedly come under fire for refusing to take a political stand during the 2016 election; however, as she said in her Instagram post, November’s midterm elections are simply too fraught not to engage.

Kirk’s unfounded assertion that Swift didn’t write the post and had “bad information” only serves to insult her intelligence and further diminish her political voice.

In contrast, Kirk was on Fox last weekend as well, and spoke approvingly about Kanye West’s post-Saturday Night Live lecture in support of President Trump.

“This is an amazingly profound cultural moment,” said Kirk, praising West for daring to “think freely” and “oppose the status quo.”

Kirk’s double standard about celebrity politics also inflames the years-old beef between West and Swift, which came to a head in 2016 over Swift’s involvement in West’s song “Famous.”

It also echoes the sentiment of Fox News host Laura Ingraham, who told LeBron James to “shut up and dribble” after he criticized Donald Trump.