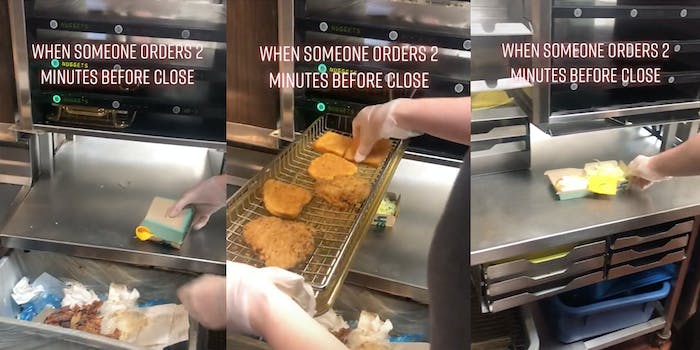 Here's how your fish sandwich gets made if you order it 'two minutes before close.'

Following a series of TikTok video’s exposing restaurants like Chick-fil-A and Taco Bell, and having their own alleged egg recipe revealed, a recent McDonald’s TikTok video shows what’s really going on behind the drive-thru when you stop by for a late-night order of burgers, fries, or nuggets.

The video uploaded by user @willbirn, which has now been viewed on the platform over 40 million times and has been liked by over 1 million users, shows a frustrated employee throwing a fish sandwich together sloppily and sending the meal on its way.

“When someone orders two minutes before close,” the text over the video reads.

In the video, the alleged employee is seen grabbing two buns and dousing them in tartar sauce before grabbing handfuls of other ingredients, like lettuce, cheese, and the fish patty itself, and throwing them together. He jams the half-assed sandwich into a box and slides it down the counter.

In response, the video caused several disgruntled McDonald’s consumers to question the employee, saying that while he may have been joking, the sandwich he made isn’t far off from what’s to be expected quality-wise from the fast-food chain.

One user wrote, “Isn’t that how they always make it? They’re gonna get some robots and a conveyer belt one day soon.” Another responded, saying, “I thought this is what you normally do,” with another adding, “Dude, McDonald’s doesn’t care about the quality of food.”

Another TikTok video from the same user shows an employee emptying mustard, cheese, onions, and pickles into a Big Mac box, closing it, and then furiously taking a bite out of the cardboard. “When the customer asks for no bun,” reads text written onto the video. In the caption, he writes, “Don’t do it.”