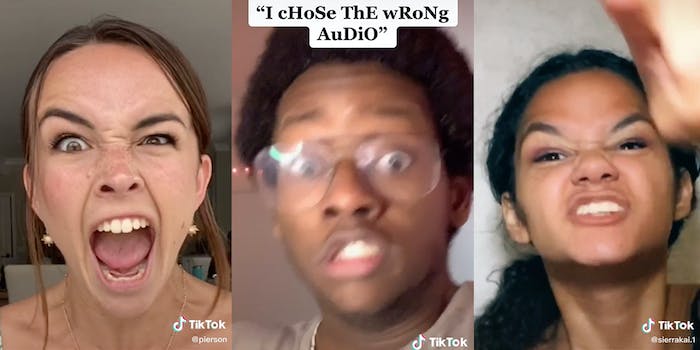 A recent wave of Spongebob TikToks has seemingly taken over the platform. Hundreds of thousands of users are creating lip-synced videos with the sound “M to the Gary” on TikTok, based on an audio clip from one of the beloved Nickelodeon character’s most classic moments of rage.

The audio clip of Spongebob yelling originates from the 2001 episode of the animated series Spongebob Squarepants, “Dying for Pie,” where Squidward convinces him to “explode.” Spongebob attempts to get angry and yell back at his friend, when Squidward actually meant for him to physically blow up from consuming an atomic bomb pie that he planted for Spongebob to eat.

The clip was sampled and merged over the chorus of the song “M to the B” by Blackpool Grime Media artist, Millie B. According to the Tab, the song was originally recorded and released in 2016 as a diss track to Sophie Aspin, another British rapper, amidst a previous beef where the two artists shared a series of songs “sending for” one another via YouTube.

The status of the two artist’s current relationship is now cordial, as the two were recently seen in a new music video for a song which allegedly replies to outside beef with another artist called Little T. They have been widely accused of allegedly faking beef for views online.

Last week, Aspin uploaded a series of TikTok’s mocking the reappropriation of the song, specifically calling out Americans’ misunderstanding of its origin. The trend of Spongebob TikTok’s using the years-old diss track directed at her has taken off mostly among stateside users on the platform.

“Can someone please tell all these Americans what’s going on?,” she said in a video. “They’re doing all this M to the B, M to the B, and like they’re following a bee. It’s not fucking about a bee?! It’s about me.”

The song has been re-released on streaming services this month and has already racked up over 4 million streams on Spotify.

With that, the short clip from the track has gained serious traction on TikTok and sparked a new trend on the platform.

Spongebob TikToks, set to “M to the Gary” by Napkin

In the videos, users are seen nodding along to the dance-electronic style bassline of “M to the B” while mouthing Spongebob’s famous quote with angry, exacerbated facial expressions. Many users place the face zoom effect on their videos to add in a focused motion style on their clips. Afterward, users return back to a calm state and nod along to the rest of the track innocently, just like Spongebob does after mocking Squidward’s notoriously agitated disposition.

The sound “M to the Gary by Napkin” on TikTok has been used to create over 154,000 videos from users on the platform. The original video posted to TikTok in August comes from user @itsmenapkin.

Perhaps the most influential video to help create a surge of Spongebob TikTok’s is popular creator @BellaPoarch‘s take on the trend. With 29.7 million followers, her video has garnered over 40 million views and 6.5 million likes within four days. The video is now being called the “most liked” video in TikTok’s history.

With that, the “M to the Gary,” sound took off, with tons of users following suit and creating similar styles of video.

The “M to the Gary” sound on TikTok currently touts a massive usage with more than 155,800 videos created.