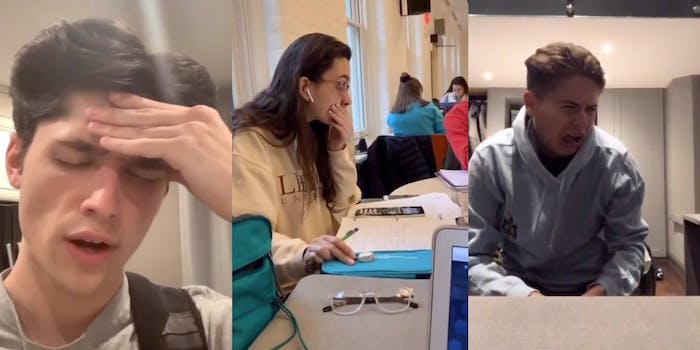 TikTok teens are procrastinating with #FinalsWeek

Shouldn't these kids be studying?

Thankfully, all the poor souls slogging through soul-crushing exams have a temporary escape from the stress through TikTok. Teens all over are taking to the platform to relieve some anxiety. Many are uploading videos to share the finals burden with their peers, while others are using the opportunity to share life hacks. Regardless of why they’ve taken to the #FinalsWeek trend, the hashtag is taking off.

The stress of finals can take a toll. People preparing for and participating in finals are often balls of inconsolable anxiety for weeks leading up to the big day. TikTok’s newest hashtag is here to relieve some of that anxiety, or at least to show people that they can have a sense of humor about it.

Many of the popular finals week TikToks show a certain sense of solidarity. These teens may be feeling the pressure of their upcoming exams, but they are well aware that they’re not alone. Sometimes, sharing the burden makes it feel much lighter.

Some of the funniest TikToks to come from the finals week trend share tales of woe. Typically, that comes in the form of complete unpreparedness. Many people heading into finals feel like they’ve dropped the ball, but probably not as hard as some of these TikTokkers.

Some of the uploaded TikToks have some surprisingly good—but very inadvisable—finals hacks. I wish I’d thought of these when I was in school.

Other people are just planning to blatantly cheat their way through every exam.

If you’re not down with cheating to make it through exams, you can always take the route one class took. Just lie to your professor so they’ll let you tape them to a tree, and flee from your responsibilities.

Unsurprisingly, the vast majority of teens on TikTok are doing a whole lot of nothing. They aren’t studying or cramming, but nor are they cheating, stressing, or working on side projects. They are just slacking off, pure and simple. Videos of teens avoiding their responsibilities quickly mired down the #FinalsWeek hashtag. One popular trend is to memorize a scene—it doesn’t really matter what it’s from—and perform it, along with the original, for that eager TikTok audience. Shouldn’t these kids be studying?