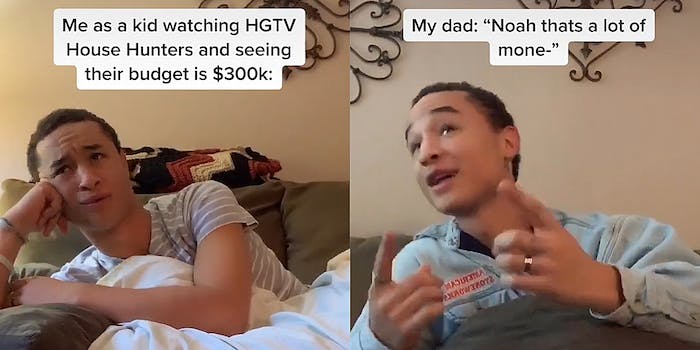 TikTok users are sharing things they thought were ‘ghetto’ as kids

The trend is being criticized for being racially insensitive.

It’s no secret that TikTok users love roasting themselves, and the latest TikTok trend has users exposing their boujee childhood selves. TikTok users have officially memed “whew chile the ghetto” and are sharing their thoughts on everything from buying houses to wedding dress budgets to name-brand alternatives.

The sound that’s going viral is from a short clip of Real Housewives of Atlanta. NeNe Leakes says “whew chile the ghetto” over sirens and the show’s background music. While “whew chile the ghetto” is not a new phrase, it was only a matter of time before teens started making it into a TikTok meme given the rampant rise of the video-sharing, China-owned platform.

TikTok user @noahpugliano made a video saying “me as a kid watching HGTV House Hunters and seeing their budget is $300K.” He also included his father’s comments in the video saying “Noah that’s a lot of mone-” before being cut off by “the ghetto.”

TikTok user @realliamsilk used the sound to show how his mother gets every last bit of soap out of the bottle.

TikTok user @samvicchiollo used the sound to make fun of Android users, saying “when you’re making an iMessage group chat but can’t change the name because someone has an Android” and captioned it “HAHA tag your friend with a Samsung so we can make fun of them for being poor #justkidding.”

TikTok user @mclovig simply said, “7th grade me seeing someone in Bearpaws instead of Uggs.”

It appears that most of these TikToks are meant to be lighthearted in nature, and users are poking fun at their younger selves for their judgments. But many think white TikTok users calling things “ghetto” is racially insensitive. This is not the first time TikToks have been scrutinized for appropriation. Another TikTok trend that had viewers reeling was the “ghetto white kid” trend. Twitter user @jennyfuur asked “ok but [for real] what is with this Tik Tok trend.”

his caption: “you’re new to school and you meet the ghetto white kid” ok but fr what is with this tik tok trend pic.twitter.com/C65VU69Ek4

Twitter user @dahvaee pointed out that TikTok’s version of “ghetto” is just imitation “Black dialect,” and tweeted “there’s too much to unpack with these Tik Tok trends.”

Though they’re trending now, after news that TikTok has been hiding content by fat, LGBTQ, and disabled users, and increased criticism of widespread stereotyping on the app, the “whew chile the ghetto” TikToks may be short-lived.