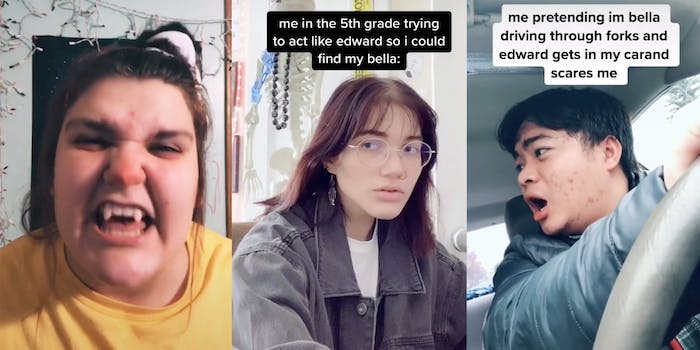 These videos will give you serious flashbacks.

There are few series that have been more impactful on young millennials and Gen Zers than the Twilight saga. Now teens are reliving Twilight love on TikTok with videos that poke fun at the series and its biggest fans.

Thanks to four sequels and Tumblr’s “Twilight renaissance” of memes, the fandom has only evolved in the 11 years the Cullen clan first hit theaters. On TikTok, where many users were in elementary school when the first Twilight movie was released, creators are looking back on the movies that gripped their pre-pubescent hearts.

The TikTok videos are mostly “point-of-view,” or POV-style, and riff on other popular acting challenges.

And since there’s nothing like a haunting piano ballad to remind you of teen vampire angst, many of the videos use the song “For Twilight Lovers” by @jasonwaund. (@jasonwaund did not immediately respond to the Daily Dot’s request for comment.)

“me in middle school listening to the twilight soundtrack on my way to the bus pretending i was bella going to meet edward outside,” user @laurenmeyerz wrote.

If you watched the Twilight saga, you probably pretended to be a vampire at least once, or maybe knew about that one kid in class who always did. If you feel like reminiscing, @lolilexi’s videos are perfect.

Maybe you were just heavily obsessed and willing to duke it out with anyone who wasn’t 100% Team Edward.

And whether you’re still a diehard Fanpire or not, you have to admit: The acting in some the TikTok videos far surpasses the movies.