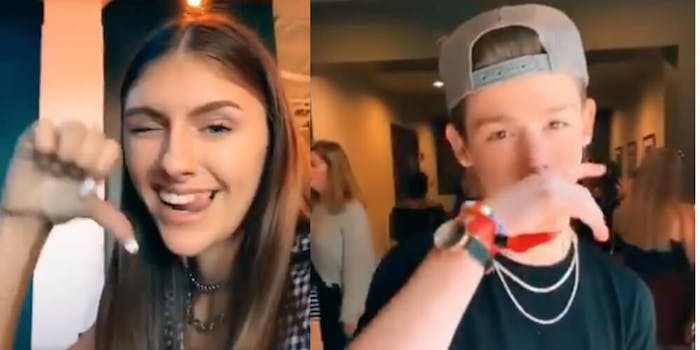 Are TikTok teens throwing up gang signs in their videos?

'UR GONNA GET SHOT STOP IT.'

From girls dancing to voicemails left by their sh*tty exes to meme-ing the PSATs, there seems to be a TikTok challenge for everything. For one of the latest, teens are wiping their fingers under their noses and giving a thumbs down afterward.

But many are pointing out that they seem to be either knowingly or unknowingly throwing up a gang sign.

dawg. the kids on tiktok are making up their own gangs signs now i- pic.twitter.com/BxchCZOgHB

“Natural selection,” one Twitter user joked, before clarifying that the motion is actually a gang sign used by the Bloods gang and “many have died behind this.”

“if u do that tik tok slatt thing in certain areas in public UR GONNA GET SHOT STOP IT,” another cautioned.

And it’s not just the teens doing it. The challenge seemed to make its way into a school where faculty members were seen doing it.

For everyone asking, what they’re doing is a gang sign. SLATT originally came from NY (Vado) and bloods used it. Young Thug popularized it in ATL with YSL. My caption is jokes but don’t do this. Many have died behind this.

Swear yt people got death wishes in every way pic.twitter.com/LdJ46K4Bjd

someone needs to tell yall this, if u do that tik tok slatt thing in certain areas in public UR GONNA GET SHOT STOP IT

The videos are being captioned and called slatt and/or slime. Young Thug popularized the terms through his music, and the two are heavily associated with him. So, hopefully, TikTokkers just think they are doing some Young Thug challenge.

And, while many argue the sign is affiliated with the Bloods gang, the Daily Dot could not find any explicit evidence of such.

“I swear if I see one more 90 pound white girl on TikTok throwing gang signs imma stick a toothpick under my toenail and kick a wall,” one person tweeted.

the slatt/slime trend is really crazy because thats a gang sign. that is slang used by real life killers. its not some cute text decoration or funny tiktok trend you can die over that shit. real life.