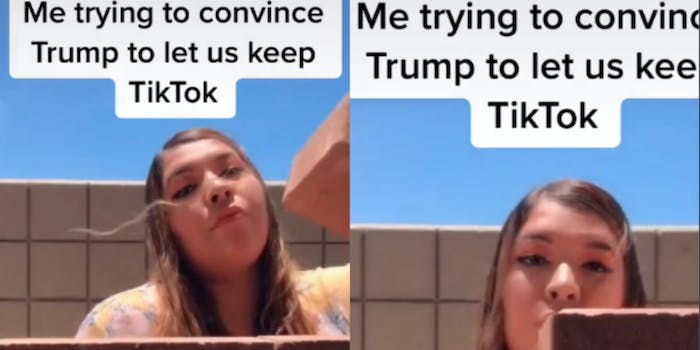 Creators are turning to seduction and strongly worded letters.

Can Trump really ban TikTok? It’s a question users are wrestling with in the wake of last week’s news that the administration is “looking at” a possible ban of the Chinese-owned app, allegedly due to national security concerns and definitely not because Trump’s Tulsa rally and online store were trolled via TikTok.

A U.S. ban of TikTok would be complicated, and this administration isn’t great with follow through. But users are taking another route to try to persuade it to not follow through. The 2006 song “Me & U” by Cassie has been circulating on TikTok for a while but it’s now being applied to a series of “seduction” videos aimed at appealing to Trump’s raging narcissism.

Before talk of a ban, people were using the song to try to draw out another stimulus check.

The #SaveTikTok hashtag started circulating last week, as users voiced more genuine concerns about what would happen if the app was banned. Michael Le posted an impassioned video about how TikTok has created a community and allowed users to support themselves, especially during the pandemic, something echoed by other young users. It has also become an important platform for activism.

Other users posted their own “memory lane” videos, looking back at TikTok predecessors Vine and Musical.ly. While there’s been talk of a possible exodus to Byte, the “new” version of Vine, the reviews haven’t been great. Alli Fitz’s strongly worded letter to the government pointed out the absurdity of the situation, though many bigger creators have already started dropping Instagram and YouTube handles just in case.

If a ban actually happens it will be surprising. Still, the company has been trying to center itself as an American entity, telling the Daily Beast that despite its Chinese parent company, “TikTok is led by an American CEO, with hundreds of employees and key leaders across safety, security, product, and public policy here in the U.S.” There are also conservative teens on the app. Maybe just tell Trump that TikTok has been cake this whole time?