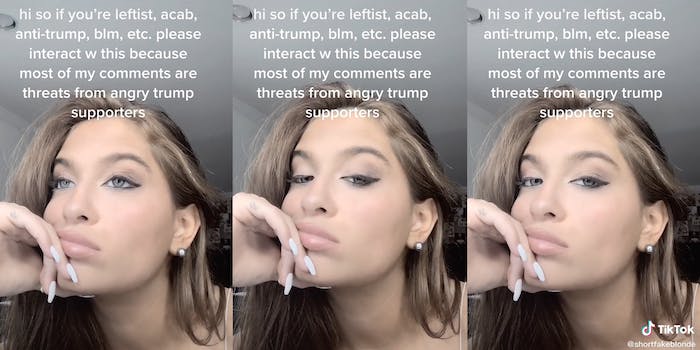 'My views have absolutely nothing to do with my mom’s.'

Being the daughter of a prominent official in a White House embroiled in controversy must be difficult. Especially when that White House official happens to be Kellyanne Conway, and her daughter is a proud, Trump-hating leftist on TikTok.

Conway’s daughter, Claudia, has amassed 15,000 followers on TikTok (@shortfakeblonde), where she makes her politics abundantly clear. “It’s a great day to arrest Brett Hankison, John Mattingly, and Myles Cosgrove,” her bio reads, in reference to the three police officers accused of killing Breonna Taylor in March.

Several of Conway’s TikToks are devoted to roasting Trump supporters and boosting different activist causes. In one video, she pretends to wipe a tear from her eye as the caption reads, “why do people hate on trump supporters…like why can’t we just respect everyone’s opinions? SIKE nah block me pls and then educate yourself.”

In a follow-up post, Conway wrote, “hi so if you’re leftist, acab, anti-trump, blm, etc. please interact w this because most of my comments are threats from angry trump supporters.”

Conway isn’t the only anti-Trumper in her family. Her father, George T. Conway III, was a lifelong Republican who deflected from the party in 2018 and founded the Lincoln Project, which has released a series of scathing videos designed to “defeat President Trump and Trumpism at the ballot box.”

Recently, Conway has spent much of her time on TikTok dragging people who question her identity or criticize her parents.

“Believe it or not, you can have your own opinions, not influenced by your parents at all, simply by educating yourself,” Conway says in one recent TikTok. “My views have absolutely nothing to do with my mom’s. Please don’t comment anything about her. Please don’t comment about my dad. Go find another hobby, sweetheart.”

Kellyanne Conway is the counselor to President Donald Trump. She’s a well-known right-wing figure who has made headlines for things like saying “anti-religiosity” was to blame for mass shootings and threatening to perform an abortion with a gun.

Tech and online culture journalist Taylor Lorenz appears to have been the first reporter to spot and spread the news of Kellyanne Conway’s daughter’s account.