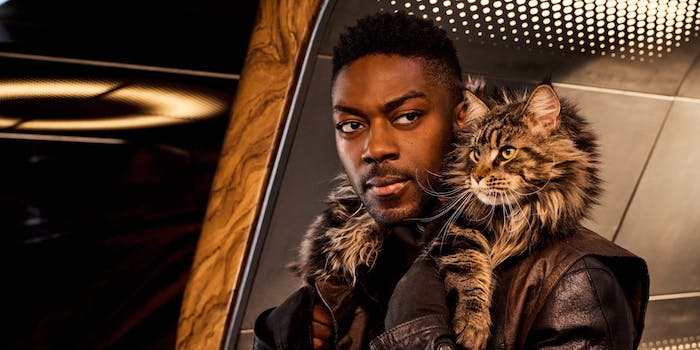 The cat made his debut during Tuesday’s Star Trek Day online convention, where Discovery released a new trailer for season 3. His name is Grudge (amazing name), and David Ajala describes him as the “ride or die” companion of our new human character Book. Played by an enormously fluffy Maine Coon-looking cat called Leeu, you can check out some of his performance in this featurette:

There’s a long history of cats joining humans for long-distance voyages, traditionally as mousers. In sci-fi, there’s obviously Jonesy the cat from the first two Alien films (iconic!), Data’s pet cat Spot from Star Trek: The Next Generation (adorable!), and the humanoid cat Cat in Red Dwarf. It remains to be seen what Grudge’s role will be in Discovery, but it’s surely going to be delightful. A space cat is exactly what this show needs.

There’s still no news on whether the show will include any of Star Trek’s Caitian cat aliens, though. There’s one in Star Trek: Lower Decks, but that kind of thing is easier with animation than when you have to stick a layer of fur onto an actual human being.