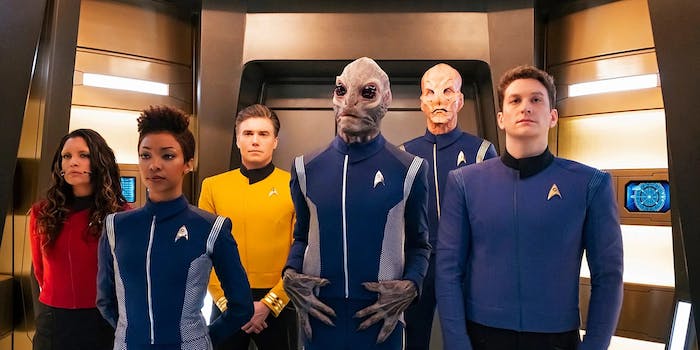 It features dozens of guests from throughout the franchise.

To celebrate the show’s 54th anniversary, the Star Trek franchise is hosting a live-streamed online convention with three hours of virtual panels. Thankfully it looks more like the punchy, short-and-sweet program of DC Fandome, rather than the meandering mess of this year’s virtual San Diego Comic-Con.

The #StarTrekDay convention will be hosted by actor/cosplayer Mica Burton and (inevitably) Next Generation actor Wil Wheaton, introducing a bunch of popular stars from throughout the franchise. There are way too many guests to list them all here but you’ll find numerous well-known actors from every Star Trek series, including Patrick Stewart, Kate Mulgrew, George Takei, Alexander Siddig, Scott Bakula, and Sonequa Martin-Green.

The event kicks off at 12pm PT on Sept. 8, with a Star Trek: Discovery panel featuring the showrunners, lead actress Sonequa Martin-Green, and her new co-star David Ajala, who seems to have a major role in season 3. Since the season begins next month and CBS just announced two groundbreaking new characters, this panel will hopefully deliver some more new info for Discovery fans.

Most of these actors have been attending conventions for decades, so they may not offer anything new to longtime Trek fans. But there’s one other panel that promises fresh material: Strange New Worlds.

This is the upcoming spinoff starring Captain Pike, Spock, and Number One, acting as a prequel to the Original Series. It was greenlit thanks to the popularity of those characters in season 2 of Discovery, and this panel brings the Strange New Worlds cast and showrunners together for their first public appearance.

You can find the rest of the schedule here on the Star Trek site.