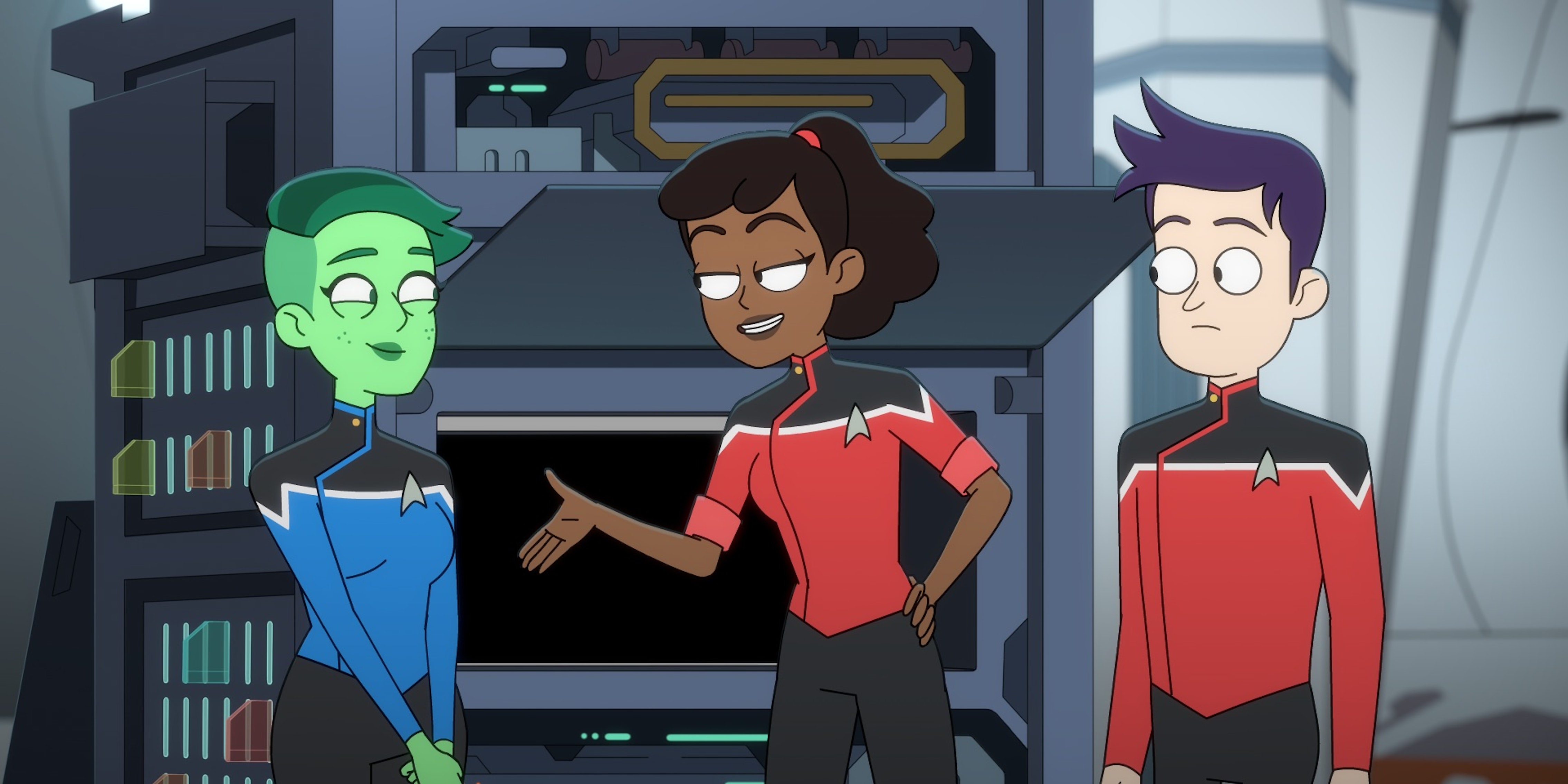 ‘Star Trek: Lower Decks’ is a dubious attempt at a zany adult sitcom

Is 'Star Trek' really a good fit for a 'Rick and Morty'-style comedy?

Under CBS All Access producer Alex Kurtzman, the Star Trek franchise is grittier and more action-packed than before, with Discovery and Picard favoring plot-heavy storytelling over humor and experimental one-off episodes. This where the new animated series Lower Decks comes in. On paper, it sounds a lot more like old-school Star Trek: a workplace comedy where a team of pals help each other through ridiculous sci-fi hijinks. However, it also feels suspiciously like CBS is partitioning Star Trek’s comedic side into a separate zone, letting Lower Decks be funny while the live-action dramas prioritize emotional torment and hectic plot twists.

RELEASE DATE: Aug. 6, 2020
CREATOR: Mike McMahan
STREAMING: CBS All Access
Created by a ‘Rick and Morty’ writer, ‘Lower Decks’ is an unoriginal attempt at a self-referential ‘Star Trek’ parody, focusing on the support crew of a second-tier Starfleet ship.

Named after a Next Generation episode that focused on background figures in the Enterprise crew, Lower Decks offers a new angle on Starfleet. Taking place on a second-tier ship called the U.S.S. Cerritos, it stars four junior crewmembers who do the unglamorous support work while senior officers get the recognition. It’s a lighthearted but rather cynical take on Star Trek’s futuristic optimism, kind of like how the recent Harley Quinn cartoon satirized the pompous tone of DC superheroes. Harley Quinn, however, is a great deal funnier and more insightful about its material. Lower Decks is a very standard kind of American adult comedy about goofy idiots who deliver all their dialogue at a rapid yell.

There’s a grand tradition of “old” Star Trek fans vociferously complaining about new innovations to the franchise, so I’m fully aware that by critiquing the direction of CBS’s new shows, I may be in the same position as people who rolled their eyes at TNG back in 1987. But I must speak my truth! While I do have some issues with Discovery and Picard (too gloomy; not smart enough to sustain HBO-style longform storytelling), those shows have plenty of strengths including excellent casting, beautiful production values, and interesting new worldbuilding. With Lower Decks, I’m kind of just like… why?

Animated in a similar style to Rick and Morty and Family Guy (showrunner Mike McMahan is a Rick and Morty alum), Lower Decks feels like it should be an off-brand parody on another channel. But because CBS is keen to milk Star Trek‘s IP for all it’s worth, they kept the parody in-house… regardless of whether this style of comedy is a good fit for Star Trek. After watching the first four episodes, I was relatively engaged with the main characters, but had barely cracked a smile because the jokes simply aren’t that funny. Despite the adult label allowing for some cursing, Lower Decks can’t do anything especially edgy because it still exists under the official Star Trek banner. But it’s also not adding anything new within the Star Trek canon remit, because each sitcom-length episode just riffs on the same tropes we saw in the 1990s: diplomatic mishaps on alien planets, workplace disputes among the crew, tech malfunctions, etc.

Our two main leads are Ensign Mariner (Tawny Newsome) and Ensign Boimler (Jack Quaid) an odd-couple duo. Mariner is an experienced, adventurous rebel, and would be a great Starfleet officer if she actually cared about career progression, which she absolutely doesn’t. Meanwhile, Boimler is a by-the-book dweeb who desperately wants to be a commander but is otherwise a coward with none of Mariner’s street smarts. Then we have Eugene Cordero voicing Ensign Rutherford (a sweet young engineer who just wants to crawl around Jefferies tubes) and Noël Wells as Ensign Tendi, a new medical recruit who arrives on the ship with naive enthusiasm. She soon learns that the Cerritos, led by hardass Captain Freeman (Dawnn Lewis), rarely gets to go on any important missions.

With more flexibility than the live-action shows, Lower Decks is packed with references from throughout Star Trek canon. The crew includes a Caitian, the cat-like aliens who were introduced in Star Trek: The Animated Series in the 1970s. We also get 1990s-era Klingons, the Borg, a Bajoran officer, and scenes poking fun at the dorky hobbies enjoyed by Starfleet officers. Appropriately enough for a show whose crew specialize in “second contact” missions, Lower Decks boldly goes where many other Star Trek episodes have gone before. The target audience is people who feel nostalgia for The Next Generation, but also want to see it parodied in a way that involves characters shrieking “Boom, surprise bitch!” and pointing finger guns. The opening scene is literally a “record scratch/freeze frame” joke about how Lower Decks is a totally quirky and unexpected idea compared to the serious adventures of Kirk or Picard. I mean, sure.

Harley Quinn is a useful comparison here, because Harley really is well-suited to this kind of tone. Her characterization is inherently fun-but-edgy, and she’s a good fit for self-referential humor. Meanwhile, Star Trek’s brand is all about sincerity. In the same way that Discovery and Picard struggle to emulate contemporary longform dramas, Lower Decks is trying to borrow a style of comedy that doesn’t really work for Star Trek. It’s actually a great illustration of how American TV categorizes the idea of “adult animation.” We have tons of sitcoms in the vein of Bob’s Burgers and Big Mouth, but very few straightforward sci-fi/fantasy dramas. If you’re an SF/F fan, you’re more likely to watch anime or children’s cartoons like Avatar: The Last Airbender, She-Ra or Steven Universe. There’s an obvious gap in the market for more sincere adult cartoons that deliver a similar sense of wonder and adventure. A gap that could be filled by, say, an animated Star Trek series that isn’t a zany Rick and Morty lookalike. If only Lower Decks was that show.