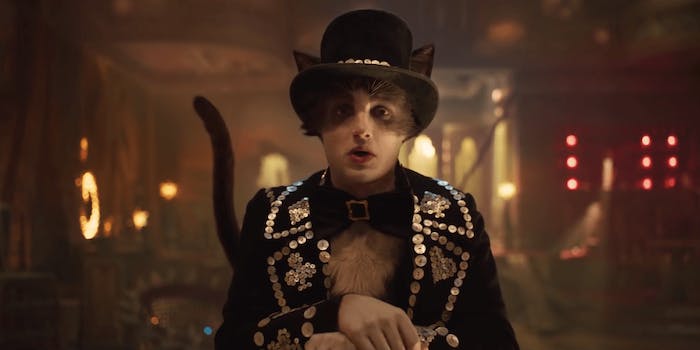 Good morning. Have you had your first cup of coffee yet? You’ll probably want to make that before you read this.

As confirmed cases of COVID-19 in the United States continue to rise, many Americans find themselves self-quarantined at home with a lot more free time than just a week ago. Some folks have picked up new hobbies, some have grappled with their new work-from-home lifestyles, and others have thrown themselves into advocacy work.

That advocacy work has taken on various forms, including but not limited to: petitioning for Universal Pictures to release the butthole cut of Cats.

Cats, if you recall, was one of the biggest critical and commercial failures in recent memory, reportedly losing as much as $100 million at the box office. Yet the baffling CGI musical has developed a passionate cult following and stoked intense curiosity among nearly everybody who has seen it. Among those viewers is writer/producer/director Ben Mekler, who on Tuesday night tweeted, “I desperately need a tell-all book about the making of CATS. It could really help me get through this.

Thankfully, TV writer Jack Waz was quick to offer a valuable behind-the-scenes nugget. “A VFX producer friend of a friend was hired in November to finish some of the 400 effects shots in @catsmovie,” he wrote. “His entire job was to remove CGI buttholes that had been inserted a few months before. Which means that, somewhere out there, there exists a butthole cut of Cats.” Waz followed up with a mission statement: “Finding this cut is my white whale #ReleaseTheButtholeCut.”

And with that, #ReleaseTheButtholeCut was off to the races on Twitter. Forget about the Snyder Cut; the good citizens of the internet need to see the ensemble cast including James Corden, Jason Derulo, Idris Elba, and Taylor Swift portrayed even more accurately. Knives Out director Rian Johnson even threw his clout behind the movement, tweeting, “#ReleaseTheButtholeCut is exactly what we all need right now.”

Many people sympathized with the plight of the unnamed, alleged VFX producer who worked on Cats, while some curmudgeonly Twitter users expressed their bewilderment at the hashtag.

Members of the #ReleaseTheButtholeCut movement may want to focus on securing the vocal support of Seth Rogen, who live-tweeted his Cats viewing experience while stoned last night. Rogen had many questions, understandably, but was engrossed nonetheless.

As humanity teeters on the brink of collapse, releasing the butthole cut of Cats could be the balm we so desperately seek.

Update 3:05pm CT, March 18: According to Mekler, there is no butthole edition, an anonymous crewmember from Cats told him. At least not an intentional one: Per Mekler, many shots resembled buttholes, and so they needed to be edited out.