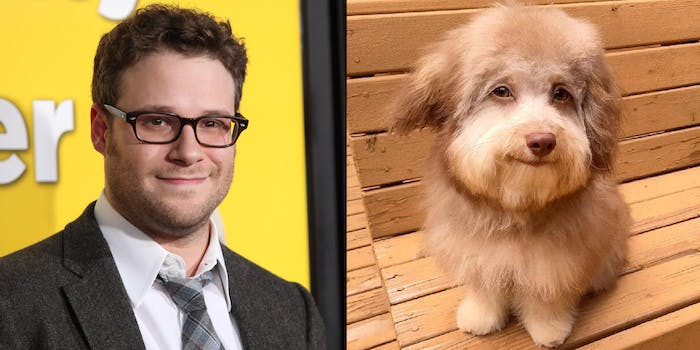 He couldn't be more flattered.

Almost everyone has, at some point in their life, come across a pet owner who looks exactly like their pet.

There is a resemblance that can’t be denied. Maybe some small vein of narcissism urged the human to buy a pet that looks just like them, or maybe the years slowly changed the two into furry and bald versions of each other. But rarely do people discover a dog that has absolutely no relation to its human identical twin. The internet, in all of its strange glory, has managed to do just that.

After an Ausiepoo named Nori Porkchop with pure, kind eyes began making the rounds online, people started to notice an uncanny resemblance. To Seth Rogen. And the 37-year-old actor couldn’t be more flattered.

It all started with Nori’s beautiful, warm eyes.

As the picture made the rounds online, dozens of comparisons were drawn. People saw Bob Ross, the Mona Lisa, and even Macaulay Culkin in Nori’s oddly human eyes. Once people started noticing Rogen, however, they couldn’t see anything else.

More Twitter users began spreading the comparison online, and it eventually made its way to Rogen. The Lion King actor found the comparison to be the highest praise, and quickly shared the photo himself.

“I’ve been tagged by dozens of people saying I look like this dog and I couldn’t be more flattered,” he tweeted on Thursday.

I’ve been tagged by dozens of people saying I look like this dog and I couldn’t be more flattered. https://t.co/x0y3fFmeMd

Fans of the actor—and of Nori’s smiling eyes—took to the comment section to share their approval. “Sorry, he’s better looking,” one commenter wrote.

People couldn’t stop themselves from drawing a side-by-side comparison. One user even made a short video overlaying Rogen’s face on the photo of Nori. Seriously, it’s uncanny.

When it was decided, once and for all, that Nori and Rogen were twins, people began wondering after Nori’s bark. If he looks that much like Rogen, doesn’t it follow that he might sound the same too?

I hope his bark sounds exactly likes your laugh 😂

I don't know why, but I felt compelled to create this. I'm sorry. pic.twitter.com/pok4IpgwJo

While half of the internet was busy giggling over Nori with Rogen’s infectious laugh, other commenters noted that the only way for Nori to truly resemble Rogen is to… well… get really high.

“Close but pretty sure it would look a little more baked,” one commenter wrote.

I mean, he does look kinda high…. pic.twitter.com/s0vs8wWlDK

I can see it. pic.twitter.com/Axga3uYBjx

If @SethRogan was a dog…. close but pretty sure it would look a little more baked…

Now we just need to see them star in a film together.