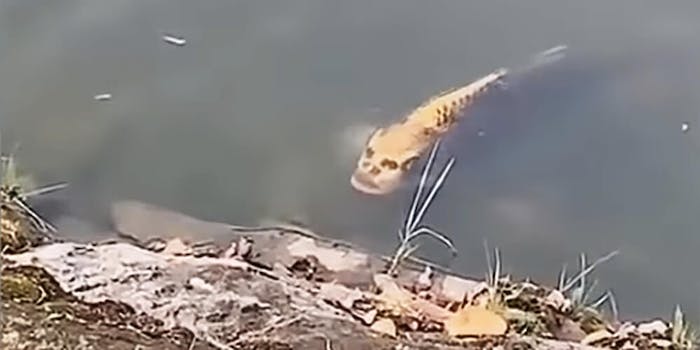 Hell to the naw.

There’s a reason why “underwater” makes such a perfect setting for science fiction and horror movies, as humans have only begun to explore the depths of the earth’s vast oceans and the strange and fascinating creatures that live below. So, every now and then, when a bewildering-looking species quite literally surfaces, people tend to freak out. Such was the case in the Miao Village in southwestern China, where a tourist recently captured a carp with a “human face” swimming in a pond.

As you can see in the above YouTube video, the fish doesn’t actually have a human face, per se, rather markings on its snoot (extremely scientific ichthyology term) that resemble two eyes, a nose, and a mouth. The 15-second clip popped up this week on Weibo, which is essentially China’s version of Twitter.

In the clip, the woman filming was apparently so “awestruck” by the swimming creature that she exclaimed: “The fish has turned into a fairy!”

OK, sure. But given that one man’s “fairy” is another man’s “kill it with fire nightmare fuel,” those on the internet had what you could call mixed reactions to the sighting. One viewer was said to have commented, “this is scary,” while another perplexingly asked, “who dares to eat it?”

As the clip made its way to Twitter, users unsurprisingly also had strong opinions about the nightmare human fish face, as you can see from some of the horrified reactions.

I don't want to see a carp or any fish, for that matter, WITH A HUMAN FACE.

IM GOING TO HAVE NIGHTMARES ABOUT THIS FISH WITH A HUMAN FACE pic.twitter.com/G2lUlXQNlz

this fish has a human face OMG !!pic.twitter.com/Vk1j8Yb6LN

I would straight up kick that human face looking ass fish in the fucking face dawg pic.twitter.com/EIEhM0Sk8w

This is not the first sighting of a carp with a so-called human face. In 2010, The Daily Mail reported on a similar-looking ghost carp that had been procured by a 44-year-old former butcher, Brendan O’Sullivan of Dagenham, Essex.

“Because of the weather earlier this year I didn’t really get to have a proper look at it,” said O’Sullivan at the time. “Then, last week, as I was sunbathing in the back garden I poked my head over the pond and there it was swimming towards me.”

“It was astonishing,” he continued. “I could easily make out from the markings two eyes, a nose, and a mouth. I thought I was suffering from sunstroke.”

The super rare “human face” fish was estimated to have been worth £40,000 at the time, so a win, perhaps? At least it didn’t have a human nose or teeth, which is arguably far more terrifying.