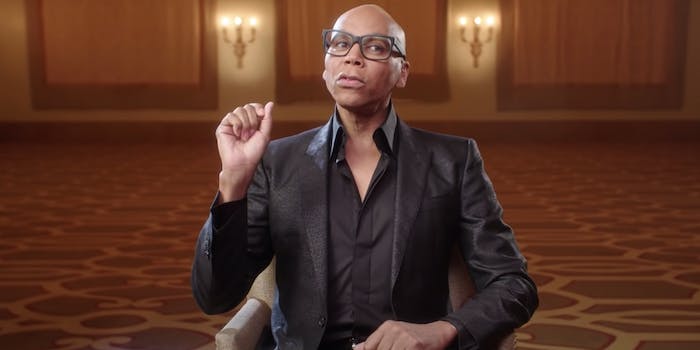 “Probably got cast on S13 omg,” one Redditor commented.

“Are you fracking kidding me?” another Redditor wrote in reference to RuPaul’s previous admission that he allows mineral companies to frack on his 60,000-acre Wyoming ranch. “Must be due to all those drilling comments. I gas oil just be quiet now.”

Yet it was Twitter user @cheritaisrandom who had arguably the most widespread—and damning—assumption about why RuPaul scrubbed his Instagram. The YouTuber unearthed several old photos of RuPaul dressed in Confederate flag attire, including a 2013 Instagram post that appears to be captioned, “The South will rise again!”

“THIS is why RuPaul mass deleted. Smh,” @cheritaisrandom captioned the post, which has been retweeted more than 15,000 times.

A representative for RuPaul and a publicist for Viacom did not immediately respond to the Daily Dot’s requests for comment.

Twitter users dragged—no pun intended—RuPaul in the replies to @cheritaisrandom’s post, accusing Drag Race and its host of racism and anti-Blackness.

“She watched as the Black queens got bullied,” @brelandleon replied. “She was very aggressive in trying to get Black queens to conform to white normativity especially, and diluting their issues. It happened to Jasmine, THE VIXEN, and Widow just to name a few obvious ones.”

Some users defended the Drag Race host, though, voicing something similar to a 2016 Bustle article, which voted the dress RuPual’s “most iconic drag look” because it “laughs in the face” of confederate supporters.

“There’s plenty to drag Ru for but the confederate flag looks shouldn’t be taken out of context,” @scorpi_h0 tweeted. “The first is Too Wong Fu as Rachel Tensions, the second was Ru during his starting days in Atlanta where you had to either provocative or pageant to get a spot.”

For the most part, however, people had no interest in hearing explanations when they had been highlighting RuPaul’s Drag Race‘s issues with race for years.

“People been saying Ru dabbles in anti-Blackness and it shows in drag race but no one wanted to listen,” @ErixMoon_ tweeted. “Will people come out and apologize and say they should’ve listened? Tune in next time on Dragon Ball Z!”