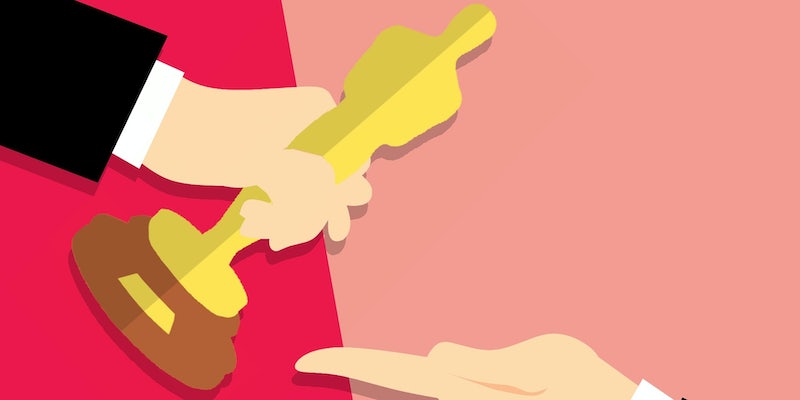 #PresentAll23: Oscars fans are mad at the ceremony’s new format, which excludes 8 awards from the show

Not for the first time, the Academy Awards organizers are pissing off their target audience. In an ongoing attempt to attract higher ratings for the Oscars, the Academy will cut eight awards from this year’s live telecast. This decision immediately drew ire from movie buffs, who saw it as disrespectful toward the nominees—and out of touch with the actual purpose of the Oscars.

The rationale is that mainstream viewers aren’t interested in less-glamorous categories like documentary short or film editing. But when the Academy attempted something similar in 2019, cutting four awards from the live show, it had to reverse its decision due to public backlash. Unsurprisingly, the people who care most about the Oscars… do actually want to watch all the Oscars!

At the 2022 ceremony, the plan is to present eight awards before the main show. These categories will then be edited back into the telecast. The sidelined awards will be documentary short, film editing, makeup/hairstyling, original score, production design, animated short, live-action short, and sound. Soon after this decision was announced, film buffs began to voice their disapproval on the #PresentAll23 hashtag:

Griping about the Oscars telecast is an annual tradition. People always have complaints about the presenters, skits, and overall format. And obviously ABC, the network airing the ceremony, is perennially disappointed by the show’s low ratings. However this year’s changes are unusually divisive, highlighting a gap in understanding between ABC and the Oscars’ core audience.

Done right, the Oscars ceremony celebrates the art of cinema, offering a balance between A-list star power and unique creative achievements. It’s a massively influential brand, but the telecast itself doesn’t attract Super Bowl-esque ratings. ABC hopes that by making the ceremony shorter and adding the much-derided “fan favorite” prize, more casual viewers will stick around. But there’s no particular evidence this will work.

Meanwhile, Oscar fanatics are incensed by the decision to remove those eight categories. Each of these awards is important to the nominees and the industry at large, and technical categories often lead to some fascinating and unusual acceptance speeches.

Also, while some of the cut categories are rather obscure, others have obvious mainstream appeal. For instance the nominees for original score include Encanto and Dune, alongside two of the most acclaimed composers in Hollywood: Jonny Greenwood (The Power of the Dog) and Nicholas Britell (Don’t Look Up).

It isn’t difficult to explain why this is an exciting category, but instead of promoting and celebrating it, ABC decided remove best original score from the live telecast. And in doing so, ABC sabotaged one of the most popular ways of engaging with the ceremony: Oscar pools.

Academy Awards fans love to try and predict the winners, and there’s a long tradition of people organizing Oscar pools for their viewing parties. The lesser-known categories are a key part of this hobby, both because they’re harder to predict and because certain technical awards play into the odds for winning best picture. So if The Power of the Dog wins for editing and score, that’s a big sign that it will win the top prize, too. In a normal year, there’s a kind of narrative build-up toward that final award. But by revealing multiple winners before the live show, the Academy destroys this sense of drama—and messes with people’s pre-arranged Oscar pools.

When the Academy agreed to cut four awards in 2019, it took less than a week to reverse its decision. With a full month before the 2022 ceremony, there’s plenty of time for the same thing to happen again, returning those eight categories to the telecast.

The Daily Dot reached out to the Academy Communications Department.