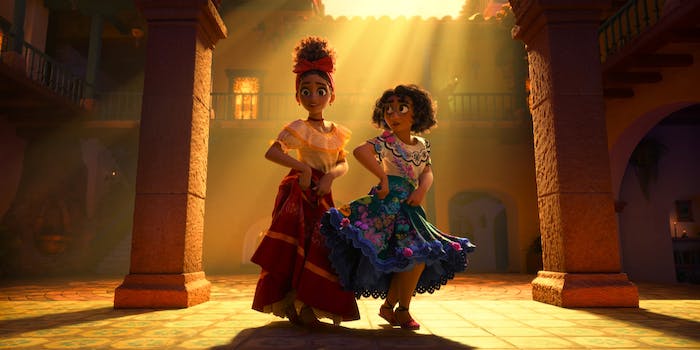 Why TikTok can’t get enough of the ‘Encanto’ soundtrack

'We Don't Talk About Bruno' is one of the most-streamed songs right now.

Encanto is a hit with both critics and audiences, and the latest offering from Disney Animation’s arrival on Disney+ on Christmas Eve opened it to audiences who didn’t (or couldn’t) see it in theaters. But the true standout of Encanto is its music, which in recent weeks has taken over TikTok.

The soundtrack for Encanto, which includes a score from Germaine Franco and songs by Lin-Manuel Miranda, was released on Nov. 19, 2021, and its rise in popularity was a slow burn. Nearly two months after its release, it pushed Adele’s 30 out of the top spot on the Billboard charts, where it had been for the past six weeks. But its songs are hits in their own right. Three Encanto songs used in four different videos charted on YouTube’s music trends (and three of the four videos are in the top 10), and they’re starting to show up on Apple Music and Spotify’s charts, too.

But Encanto’s biggest hit? It’s “We Don’t Talk About Bruno,” the ultimate gossip song centered around a member of the Madrigal family the audience had yet to meet. The song plays out as the threat to the Madrigal family home’s magic becomes harder to ignore and Mirabel (Stephanie Beatriz), the only non-magical member of the family, inquires about Bruno (John Leguizamo)—her estranged uncle who can see the future—after coming across one of his visions in which she features. The longstanding mentality is that “we don’t talk about Bruno” (previously cited in “The Family Madrigal”), but despite that, once Mirabel opens the door a crack, most of her family steps in to talk about all of the ways that Bruno’s ability to see the future has brought nothing but misery upon them.

It’s not just the song. The song’s vivid dance moves were first crafted by choreographer Jamal Sims and his team, filmed with a group of dancers performing along to the song, and then used as a reference point by the song’s animators.

Thanks to assistant choreographer Kai Martinez, who uploaded the original choreography online in early January, you can see for yourself just how much the two line up.

But, apart from being viewed or listened to millions of times, “We Don’t Talk About Bruno” is a bonafide hit on TikTok. To date, people have uploaded more than 184,000 TikTok videos featuring audio from the song in every way imaginable. And it’s easy to see why. It’s a true ensemble piece that gives voice to several characters we haven’t heard much from yet. The vast vocal range allows anyone the comfort to cover it if they want to, and the visual language—present in another famous Disney gossip song—is fun to replicate in video form.

Many TikTokers are lipsyncing to the lyrics, with Mirabel’s cousin Dolores’ (Adassa) hushed verse being particularly popular to recreate.

The more theatrical verse from Mirabel’s cousin Camilo (Rhenzy Feliz), who can shapeshift, was another popular choice—as was the love for Bruno himself, who you can see dancing far in the background in a couple of shots in the film.

“Bruno just vibing to his family talking sh!t abt him is such a mood,” @synxx_0 wrote.

Many of the videos include TikTokers cosplaying as the characters, and you don’t have to scroll long to find every character; someone even covered the three random villagers who took issue with Bruno.

And Beatriz, whose character has much more of a minor role in the song, even got in on lipsyncing alongside Tía Pepa (Carolina Gaitán), whose emotions control the weather, and Tío Félix’s (Mauro Castillo) verse in which they talk about how Bruno’s prophecy led to a hurricane arriving on their wedding day.

It’s not the only song that’s catching on. “Surface Pressure,” the song in which Luisa Madrigal (Jessica Darrow), the middle Madrigal sister, details her fears and insecurities about the impossible expectations her family and the nearby village expects of her due to her strength. With more than 54,000 videos using the song, it’s proving to be another popular choice. It’s especially prevalent among older siblings who can relate to the song’s message, and there’s a chance that there may have been some side-eyes between children and parents as it played.

It might not be as much of an ensemble as “We Don’t Talk About Bruno,” but “Surface Pressure” still has plenty of dance moves to emulate; even the donkeys even got some love.

Some people even also used a Luisa figure included as part of McDonald’s Happy Meals to show just how much the toy Luisa can lift up. (The answer: literally everything.)

And “The Family Madrigal”—the exposition-heavy song that introduces every member of the Madrigals and their corresponding magical gifts—has also been a growing hit with more than 54,000 videos including clips from it.

The growing rise in Encanto’s soundtrack shows just relatable the songs, as well as Encanto itself, are, even in their specificities. While the film was warmly received by both critics and audiences alike, the streaming release and the holiday break helped fuel the film’s popularity. And the people who made Encanto are thrilled by the reactions from fans.

“I could look at the TikToks all day,” Jared Bush, one of Encanto’s directors, told the New York Times. “Everyone is finding a different entry point, whether it’s a specific moment or character dynamic. There’s something in it for everybody and, honestly, it’s just delicious.”