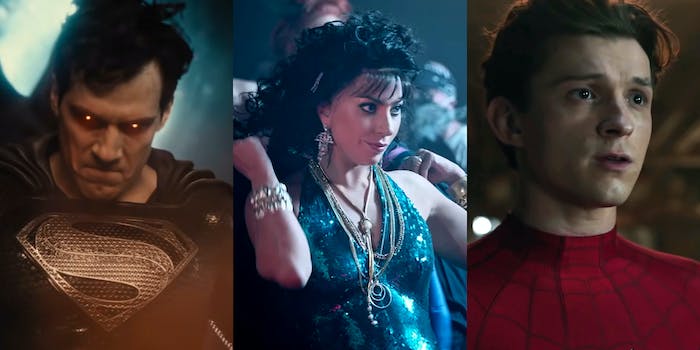 This year's Oscars will recognize a 'fan favorite' movie, selected by Twitter hashtag. It could lead to some chaotic results.

Alongside the main awards, this year’s Oscar ceremony will include two second-tier prizes chosen by the public. One recognizes a “fan favorite” film while the other celebrates a standout scene, and while they won’t receive a real Oscar, they’ll be announced during the telecast. The winners are chosen via Twitter hashtag and website submissions, which tells you precisely how serious these non-awards actually are.

The #OscarsFanFavorite contest arrives hot on the heels of a manufactured controversy about Spider-Man: No Way Home supposedly being snubbed for a best picture nom. Some Spidey fans accused the Academy of excluding mainstream hits; a recurring argument that doesn’t reflect reality (Black Panther was nominated for best picture!), and misunderstands the purpose of the Oscars themselves.

The whole point of the Oscars is prestige. Ratings for the telecast may be low, but people still really care about these awards. They’re a respected symbol of artistic success. So if the Academy starts handing out nominations based on commercial popularity, it weakens the Oscars brand. That’s the tension at the heart of this Spider-Man situation. MCU fans crave Oscar recognition, but Marvel rarely releases an Oscar-worthy film. The Academy’s solution is to introduce this Twitter prize, an idea with an amusing potential for disaster.

Considering the long tradition of creating fake Twitter accounts for astroturfing purposes, people will definitely try to game the system. And with some passionate fandoms in play, there could be some chaotic results:

Justice League is already a major presence on the #OscarsFanFavorite hashtag, which is likely to cause problems down the line. Zack Snyder fans are extraordinarily vocal online and have a track record of making Justice League-related hashtags trend for days on end.

The problem is, Zack Snyder’s Justice League is an edited re-release of a 2017 film. It’s not eligible for the 2022 Oscars. It may well become the dominant film on the hashtag, only to be rejected by the Academy—thus creating an even bigger backlash, which is what they wanted to avoid in the first place.

4. A movie most Oscar viewers haven’t heard of

Despite the specter of Spider-Man looming overhead, this Twitter vote is a great opportunity for international film buffs to make their voices heard. India’s Jai Bhim is an obvious example, an acclaimed legal drama that many people believe was snubbed, and already has an active fanbase on Twitter.

It would be great to see the Academy’s publicity stunt have a constructive outcome, but the more entertaining result would be if an overseas megafandom hijacks the vote for a total wild card. There’s a storied history of K-pop fandoms brigading Twitter hashtags for unrelated topics, and if (for example) the BTS ARMY decide to throw their weight behind an unexpected nominee, it’s curtains for Spider-Man.

A classic Oscar Movie! Opening to mixed reviews, this lavish 158-minute biopic features an all-star cast directed by Ridley Scott, offering performances that range from respectable (Adam Driver) to catastrophic (Jared Leto). Crucially, it also inspired one of the thirstiest Oscar campaigns in recent memory: Lady Gaga giving dozens of interviews about her immersive, Method-adjacent acting techniques while her co-stars looked on in confusion.

House of Gucci is exactly the kind of not-very-good movie that plausibly could win an Oscar, as proven by the multiple nominations for Being the Ricardos. And while the film itself doesn’t have a Marvel-level fanbase, Lady Gaga definitely does. The Little Monsters could make this happen.

2. One of the best picture nominees

Arguably the worst of both worlds. “Real” Oscar nominees don’t want to collect a fake award, and blockbuster stans would be frustrated once again. However, it would be very funny to watch someone like Jane Campion (The Power of the Dog) graciously pretend she cares about a Twitter poll.

2021 saw the release of three other MCU movies, one of which is a real contender here: Eternals. Not because it’s popular, but because it isn’t. With an unflattering 47% score on Rotten Tomatoes, Eternals is the most divisive MCU film to date. This puts its fanbase on the defensive, repositioning a Disney blockbuster as a scrappy underdog that mainstream audiences just didn’t appreciate. It’s already a popular choice on the hashtag.

If Eternals wins, there’s something for everyone to be annoyed about—including the fact that director Chloé Zhao is already an Oscar-winner, swinging the argument right back around to “elitism” for disgruntled fans of Spider-Man and Zack Snyder.