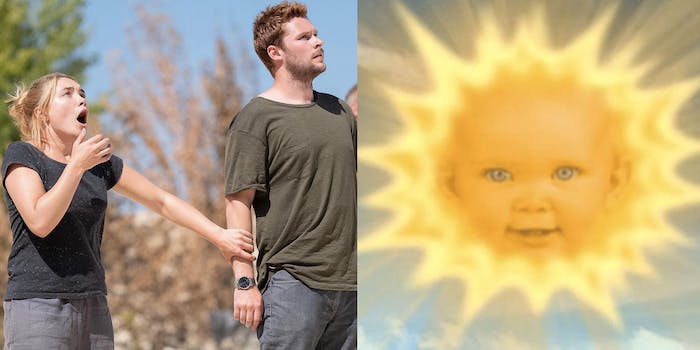 It's as ridiculous and fabulous as we need during these times.

Fortunately, existing content to draw inspiration from is basically endless, and that’s why, almost a year after its release, Midsommar has become the inspiration for a new meme that’s as ridiculous and fabulous as we need during these times.

Remember early on in the film when (spoiler alert!) Florence Pugh and whoever else was backpacking through Swedish cult territory with her were jolted into their new reality by the old man and woman jumping to their deaths as part of a ritual sacrifice?

Don’t worry, nobody wants to relive the actual bloody landing, but Florence’s shock as she grabbed onto her loser boyfriend is the perfect reaction to basically anything, sending it straight to meme town.

Some of the best memes to come from this are people combining this horrific scene with other iconic moments from pop culture history.

While others are mining wayyyy back through classic entertainment to find the perfect images to pair.

And some of these memes are particularly relatable to our current lives in pseudo-isolation, like Florence Pugh gasping at a gift floating down from the sky in Animal Crossing: New Horizons, aka the chill game basically everyone is playing now.

But as time ticks on, keep an eye out for even more Midsommar memes. As puzzling as it is that this obvious one took so long to catch on, there are seriously so many other meme-able images to mine from that film.