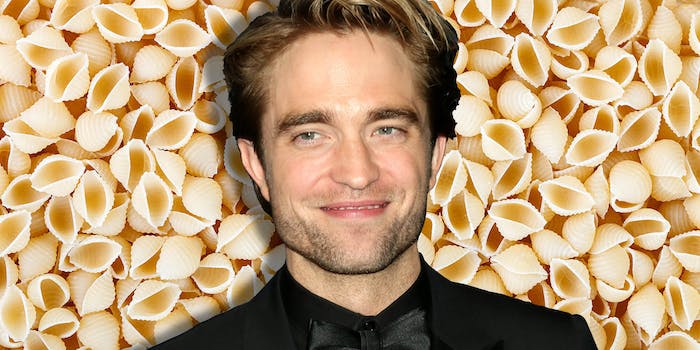 Give Robert Pattinson a cooking show?

During these uncertain times, at least Robert Pattinson’s hand-held microwave pasta disaster is bringing us together.

Pattinson gave an in-quarantine interview to GQ, which it published this week. He photographed himself from a London apartment rented by the producers of upcoming film The Batman, and talked about Christopher Nolan’s summer release Tenet. But his eating habits quickly grabbed the internet’s attention.

Pattinson explained that he’s on a “meal plan” for The Batman, which makes sense, but then he added: “Like, I eat out of cans and stuff. I’ll literally put Tabasco inside a tuna can and just eat it out of the can.” He claimed he’d Googled “How to microwave pasta,” and later in the interview revealed his business plan for a pasta you can hold in your hand, like pizza. He dubbed it piccolini cuscino, which roughly translates to “little pillow.” He then attempted to make it, which involved microwaved penne pasta as well as sugar, cornflakes, sauce, hamburger bun, cheese, a melted latex glove, and an inflamed microwave.

Though Pattinson’s known for being a trickster during interviews, there was something relatable about trying to make a quarantine recipe that sounded good in theory but turned out a mess. (Also, Pattinson’s a Taurus. We have a complicated relationship with food.) Mel‘s Joseph Longo attempted to make the dish, which turned out more like “baked ziti than a pasta sandwich.” The Takeout‘s Sara Lebow came up with something “painfully sweet and almost sandy in texture.” The Guardian‘s Max Benwell said: “It’s edible. I’m able to eat a few mouthfuls. This turns out to be a big mistake.”

But the memes were already served.

Troll or not, he’s an influencer now. Please let Pattinson’s Batman at least be a food blogger.