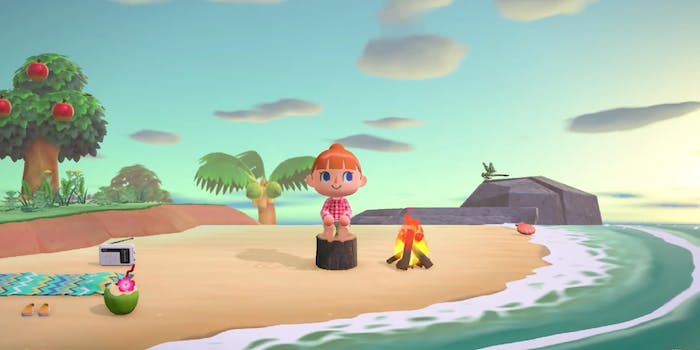 He destroyed the island in retaliation for her forgetting a grocery item at the store.

One redditor turned to the Relationship Advice subbreddit with what she thought was a “really petty thing”: Her boyfriend trashed her island in Animal Crossing: New Horizons. But, as the post went viral, it quickly devolved into a conversation about domestic abuse.

The redditor, 27, started off the post by writing that her boyfriend, 28, was going to make them dinner until he realized she forgot an ingredient for the meal at the store. He threw a tantrum and refused to make any dinner, even after she looked up recipes that they could make without the missing ingredient. She said she lost her temper and went to go cool off in the shower.

“I didn’t shout when I lost my temper, I just said something dumb like it being unfair and forgive me, I cried a little. I was being childish and I totally accept that,” she wrote.

When she got out of the shower, he was playing Animal Crossing, which he “doesn’t really play” but has a character on her island. He called her over to check out what he had been up to.

“[I] was upset to find he had literally destroyed my entire island. Flowers ripped up, fences removed, random cliffs and bits of water,” she wrote.

She wrote that she had spent hours working on her island in quarantine.

“I know this sounds really embarrassing and child-like but I lost my job recently, I’m housebound and it’s just something I was proud of,” she wrote. “I couldn’t stop crying.”

He told her “it was just a game” she could fix, but she said she can’t imagine playing it, let alone fixing it, without feeling sad now.

“He knows it’s something that has brought me happiness during quarantine,” she wrote. “I admit I am really sensitive right now and definitely struggling, however, my partner just doesn’t seem to understand that my life feels really empty right now and destroying what little I have, is really upsetting me.”

She ended her post by saying that he thinks she is overreacting and acting childish. “How can I explain this to him?” she asked.

Redditors pointed out that destroying the island in retaliation for her forgetting a grocery item at the store is emotionally abusive.

“And then smugly said ‘do you want to see what I’ve been up to?’. He knew exactly what he was doing and frankly it’s emotionally abusive,” one wrote.

Others saw his actions as major red flags.

“What’s the next punishment? He breaks your favourite cup? He throws out a shirt you like? It might escalate,” another redditor wrote in response.

Some just wanted her to know that being upset over the destruction of her island isn’t silly.

“It’s not silly at all. I know some people think that, but any hobby or thing that helps you relax is valid,” one wrote. An essential worker explained that the game gets them through “some awful days.”

The original poster later created an update to say that his behavior wasn’t part of a pattern, he apologized and is going to help her rebuild her island. However, people were still concerned.

There has been a rise in domestic abuse due to victims being quarantined with their abusers.

“Work, school, community centers – those might have been sanctuaries under normal conditions, but now [victims] don’t have those anymore,” Kathryn Laughon, a University of Virginia School of Nursing professor who is an expert in intimate partner violence, told UVAToday. “Isolation is a key component of intimate partner violence and the coercive control of individuals, and a pretty typical strategy used by abusers.”