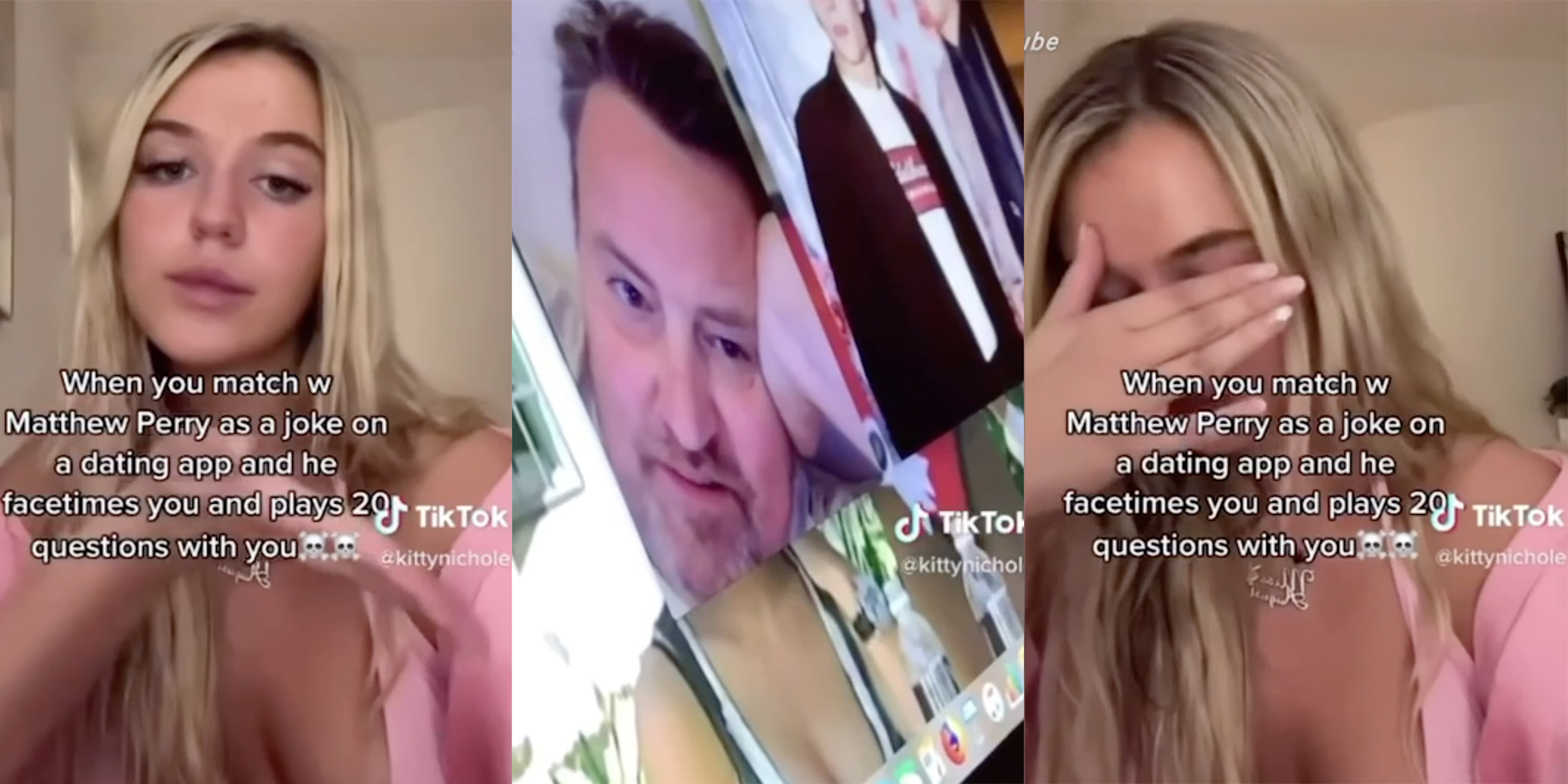 'Do you always play with your hair?'

In the wake of Ben Affleck’s Raya match exposing him on TikTok, another young woman has come forward with a video showing Matthew Perry flirting with her over FaceTime after the two connected on the exclusive dating app, Raya.

Kate Haralson, user @kittynichole on TikTok, originally posted the video showing Perry asking her about her hair on FaceTime in May 2020 before deleting the clip and changing her profile to private. Amid the Affleck news, it returned to the spotlight as Haralson spoke to Page Six.

“Do you always play with your hair?” Perry asks Haralson in the video.

The two originally matched on Raya when Haralson was only 19 years old and Perry was 51, Page Six reports.

In the video, reposted by the Queensland Times, Haralson can be seen shaking her head and cringing on camera as the text reads, “When you match with Matthew Perry as a joke on a dating app and he facetimes you and plays 20 questions with you.”

The video continues by showing Perry over FaceTime on Haralson’s laptop as the pair get to know each other outside of the app.

“A lot of people were saying I’m a bully and mean for posting this, and it made me feel kind of bad, but at the same time, I feel like a lot of guys in Hollywood are talking to all these young girls and it’s something that I think a lot of people should be aware of,” Haralson told Page Six.

On Instagram, many users filled the comments section of Perry’s recent posts with supportive messages, attacking Haralson for trying to get famous off of Perry’s presence on a dating app.

“The TikTok bimbo who is trying to ruin you for her 15 minutes of fame is trash,” one user commented. “Sorry she did that to you.”

Others took a more offensive approach, blaming Perry for flirting with a young women online when the age gap was so large.

“Hit on any teenagers lately?” one user wrote.

As more young women come forward from their experiences on the app, many viewers are shocked by how common it is to see celebrities on Raya, an elite dating app that accepts only 8% of its applicants, according to the website.

On Tuesday, another TikTok released a video from Ben Affleck after the pair matched on Raya. Nivine Jay, user @nivinejay on TikTok, unmatched with Affleck on Raya after assuming it was fake only to find out the account was apparently him.

After she unmatched with Affleck, the actor sent her a video on Instagram asking what happened.

“Nivine, why did you unmatch me? It’s me,” Affleck said in the video, which Jay showed to TikTok.

The video captioned, “Sorry Ben #raya,” has over 8.5 million views, 1.3 million likes, 34,700 shares, and 16,600 comments as the TikTok community freaked out over the incident, calling Affleck scary while others shamed Jay for exposing him.

Others were quick to call out the actor for harassing Jay after she unmatched with him, eager to know if she had responded to his video message. “The way he said ‘its me’ my soul would have left my body,” another user commented.

“Confirmed my soul did leave my body,” Jay responded.

On Friday, Chrissy Teigen called out Affleck and Perry. According to Page Six, Haralson came forward after reading about Jay, and the two have since become friends online.

Representatives for Raya, Matthew Perry, and Haralson did not immediately respond to the Daily Dot’s request for comment.