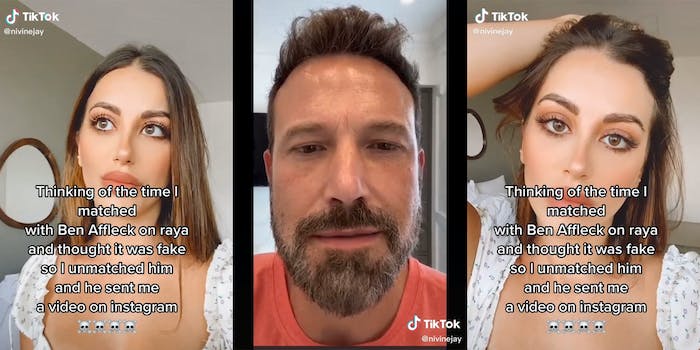 'Why did you unmatch me?'

Ben Affleck saying “It’s me” has never sounded so ominous.

On Monday, actor and comedian Nivine Jay posted a video to TikTok, explaining that she matched with Affleck on the celeb dating app Raya. She doesn’t specify when they matched, but claims she thought his profile was fake so she unmatched him. He then allegedly sent her a video on Instagram, confirming it was him.

“Nivine, why did you unmatch me?” says Affleck, face inches from the screen. “It’s me.”

Jay’s video now has more than 3 million views, and it’s only natural to wonder if this is potentially a deepfake—they’re all over TikTok. But that certainly sounds like Affleck’s voice, and he’s known for using Raya.

People seemed torn between his response being creepy and funny. “Why is this scary low key?” asked one commenter on TikTok. Another replied: “I blame gone girl.”

The video also blew up on Twitter, where Jameela Jamil tried to get a Good Place name-drop in: “There was that one time I told my good friend Ben Affleck not to message girls on instagram and say ‘it’s me’ like a mafia boss.”

Jay told E! that she wasn’t trying to embarrass or poke fun at Affleck by posting the video: “I was making fun of myself for thinking he was a catfish and it was just supposed to be funny.”