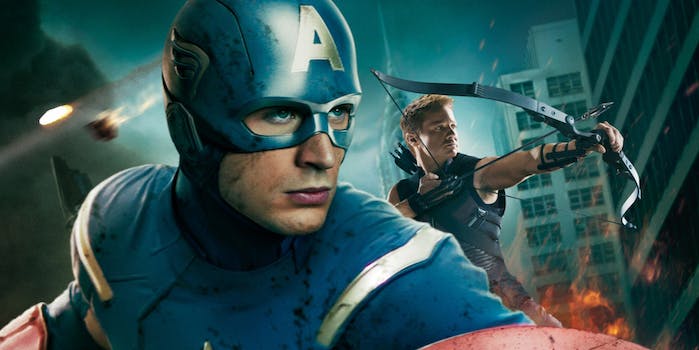 Fans delve into Captain America's personality and background to find the hero they want him to be.

In the 2011 Captain America movie, Steve Rogers’ first mission after getting his supersoldier powers is to go on a propaganda tour.

Rather than saving kittens from trees or battling supervillains (or fighting the Nazis, which is what he actually signed up to do), Steve ends up as a USO performer, touring with a team of chorus girls.

Each night, they perform a song called “Star Spangled Man,” during which Captain America punches a Hitler lookalike on the nose and implores the audience to buy war bonds. The whole thing is a perfect parody of 1940s sepia-toned Norman Rockwell patriotism, and Captain America—or rather Steve Rogers, behind the mask—grows to hate it. He wanted to do his duty back when he was an undernourished, asthmatic artist, but now he’s a muscle-bound Adonis, it turns out his main job is to sell comics and appear in propaganda movies.

Captain America: The First Avenger follows a pretty typical superhero storyline: an underdog character gains superpowers, battles adversity while trying to do the right thing, suffers a loss, and finally defeats the bad guy. Of course, the movie ends with Cap crashing his plane into the ocean and waking up in 21st-century New York , but the lack of a happy ending is the only major departure from the traditional superhero narrative.

The interesting part is how Captain America’s fandom chooses to interpret him not just as a character, but as a symbol.

“Star Spangled Man” is a perfect example. In the movie, it’s a cheesy musical number that’s used to illustrate Steve Rogers’ growing frustration with being a “performing monkey” rather than a real soldier, but fans remixed it to have a more nuanced meaning. Ryan Sanura recorded a haunting acoustic cover of the song, inspired by a fanfic by author and Marvel fan Sam Starbuck, in which Steve Rogers comes across a modern-day interpretation of the song. “It’s not an anthem to raise money for a war or get enlistment numbers up,” Steve realizes. “It’s a cry out for help. Who’ll rise and fall, give their all for America?” In the 21st century, the answer is no longer clear.

Most of the time, fandom’s remix culture is about taking a particular detail from a book or movie, and expanding upon it until it tells the story you wanted to hear in the first place. In the Marvel universe, hundreds of thousands of words of fanfic have already been expended on redeeming Loki, who tried to commit genocide during his first appearance in Thor, and later attempted to take over Earth in The Avengers. In the case of Captain America, the main difference between canon and “fanon” isn’t quite so drastic. It’s more about the way people interpret Captain America as a symbol, both in the real world and within his own fictional universe.

The upcoming Captain America: The Winter Soldier is being marketed as an action movie sequel to The Avengers, complete with overtly patriotic TV spots during the Olympics, intercutting footage of Cap’s stars-and-stripes uniform with American athletes getting ready to compete. This kind of marketing is presented without irony, which is probably why so many non-Marvel fans assume that the movies themselves will be equally bombastic displays of American pride.

In fact, this clash between Cap’s real personality and his manufactured public image is a topic that Marvel fanfic writers tackle all the time. There’s an entire sub-genre of stories where Steve Rogers is confronted by reporters or politicians who expect him to stand up for “traditional values,” only to discover that Cap really does stand for freedom and equality, up to and including gay marriage. You could probably spend all day reading stories about Steve going on the Colbert Report (Colbert has a Captain America shield in the background of his actual studio) and coming out in favor of gay rights, women’s’ rights, free access to healthcare—or just plain coming out.

Based on Steve Rogers’ background and personality, it’s wonderfully easy to write him as a kind of idealized superhero who adheres to the social justice values held by many people in online fandom. He may look like a corn-fed Midwestern hunk, but he was originally a weedy orphan from Brooklyn, constantly getting beaten up for trying to stand up to bullies. Of course, what happened after that depends on which branch of Marvel canon you decide to go for.

Like most major comic book superheroes, Captain America has gone through various different iterations, from heroically punching Hitler on the nose in 1941, to the borderline racist hardass of the early 2000s “Ultimates” comics, to his current characterisation as the feminist, sensitive, family-friendly Chris Evans Captain America of The Avengers movie franchise.

On Tumblr and in a lot of The Avengers fanfics on Archive of our Own, you’ll meet a version of Steve Rogers who’s been cobbled together from multiple strands of Marvel canon and real-world history, creating a hero who grew up during the Great Depression and wears a garishly patriotic stars-and-stripes uniform every day, but is still comfortable with speaking out in favor of food stamps and Obamacare, and being in a relationship with another man.

There’s even an ongoing debate on Tumblr over just what aspects of Cap’s backstory would support the widespread “headcanon” that Steve Rogers is a feminist, socialist, socially liberal guy. In a blog post titled “Steve Rogers isn’t just any hero,” Steven Atwell explains why Steve Rogers, as a working-class artist and soldier in the 1930s and 1940s, would probably have very liberal values.

“Steve Rogers grew up poor in the Great Depression, the son of a single mother who insisted he stayed in school despite the trend of the time… then orphaned in his late teens when his mother died of TB. [H]e came of age in New York City at a time when the New Deal was in full swing… and a militant anti-racist movement was growing.

“Then he became a fine arts student. To be an artist in New York City in the 1930s was to be surrounded by the “Cultural Front.” And if a poor kid like Steve Rogers was going to college as a fine arts student, odds are very good that he was going to the City College of New York at a time when an 80% Jewish student body is organizing student trade unions, anti-fascist rallies, and the “New York Intellectuals” were busily debating Trotskyism vs. Stalinism vs. Norman Thomas Socialism vs. the New Deal in the dining halls and study carrels.”

Essentially, when people expect Captain America to be a hyper-conservative patriot, they’re being influenced by a modern view of 1950s post-war American morals (thanks, Mad Men) and the 21st century values associated with being a military hero who wears a giant American flag all the time. This doesn’t actually take into account Steve Rogers’ “real” cultural background.

By rebooting Captain America’s origin story back to the 1940s, the Marvel movie universe opened him up to being one of the most politically engaged superheroes of the present day. Marvel remains one of the most popular fanfic fandoms on Ao3, with Captain America as one of the two most popular characters (usually paired with Iron Man). And a hell of a lot of those fanfics take the personality and ideals of the current movieverse Captain America, and use them to explore the kind of slice-of-life situations that don’t usually make it to the big screen.

Along with adventure stories and erotica and short fics where Steve figures out how to work the Internet, fans have gone to the trouble of researching WWII-era gay culture and minor New York artists to slot into their fanfics, often forcing modern-era characters to confront their own prejudices in the process. As illustrated in this video by fanvid artist Thuvia Ptarth, Captain America is the foundation block on which all the rest of The Avengers’ storylines are built, and new revelations about his backstory are enough to disrupt the entire superhero mythos.

Cap has a near-unique role as a superhero both within canon and in real life. The Agents of S.H.I.E.L.D. TV show is basically a result of the popularity of Agent Coulson, who was a relatively minor character until The Avengers revealed him to be a Captain America fanboy, instantly transforming him into an avatar for Marvel fandom. Coulson’s collection of vintage Captain America trading cards are both an affectionate nod to comic book nerdery, and a genuine plot point in the movie.

Marvel fans recognize Captain America’s power as a cultural icon, which is how you end up with fanfics where 21st century documentary filmmakers interview Cap’s WWII colleagues and discover that Steve was secretly in a relationship with his best friend Bucky back in the 1940s, or where a queer Agent Coulson talks about how his childhood hero Captain America inspired him both to fight for his country and for equality.

Captain America: The Winter Soldier comes out in a couple of weeks, bringing with it a new set of inspirations for fan writers and artists. The Winter Soldier in question is one of the central stories of the Captain America mythos: the brainwashing of Steve’s best friend Bucky, who becomes a Soviet assassin and loses all memories of his former life. It’s a tale to rival Sherlock Holmes’ return from the dead, and will introduce Cold War politics to a narrative that previously just skipped directly from WWII to the 21st century.

It’s difficult to predict fandom’s creative response to the new Captain America movie, but a favorite topic is always the conflict between Steve Rogers’ duty to his official masters, and the “real” duty that he eventually ends up choosing instead. In The First Avenger, he abandoned his post as a performing monkey to rescue Bucky from the Nazis, but this time round it’s more likely to be a choice between following orders as a S.H.I.E.L.D. operative, and saving a friend’s life.

Of course, any new canon will also be mined for potential proof of Cap’s status as the ultimate good guy. While Tony Stark is probably too self-centred to pay attention to politics, Thor is an alien, and Hawkeye and Black Widow are both isolated from everyday society, Steve Rogers is the one Avenger who can realistically inspire a fanfic about service industry union strikes—and actually have people read it.