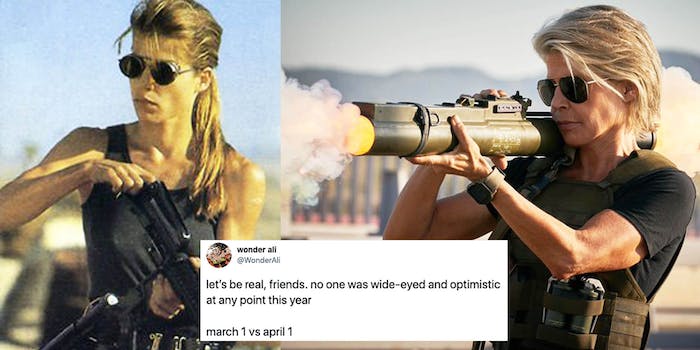 It feels like entire years have passed from March 1 to April 1.

It’s hard to believe that it’s been less than one month since self-quarantine and social distancing became our new normal. Just think! When March 1 rolled in (albeit somewhat less lionish than usual) all anyone cared about was Super Tuesday, primary elections, daylight saving time, and so on. Then, just a scant week into the month, the world was shocked when the South by Southwest (SXSW) festival in Austin, Texas was canceled for the first time in 34 years due to the unfolding coronavirus pandemic.

And now, we’ve finally arrived on April 1. But for most of us, it feels like literal years have gone by since March 1. So, in lieu of April Fool’s Day pranks—since that holiday, along with others, has also effectively been canceled this year—many are instead posting “Me on March 1 vs. Me on April 1” memes.

The premise is certainly nothing new. We’ve seen it before, such as in 2016, when people at the time compared themselves to a decade earlier. Who could have guessed that just a scant few years later, a single month (or three weeks, if we’re being honest) would feel like an entire decade?

Most of these memes come in the form of pop culture or celebrities, so it’s easy enough for everyone to play along. We’ll start out with a wildly appropriate example of Linda Hamilton starring as “Sarah Connor” in the first Terminator movie versus her role in 2019’s Terminator: Dark Fate and go from there!

Even Bart Harley Jarvis—one of the most aggressive babies we’ve ever met—was no match for the month of March.

From March 1 to April 1, every day felt like Midsommar:

And then there’s your obligatory March 1 vs. April 1 sports-related memes:

If we all thought March 1 to April 1 was bad, just imagine how we’ll all feel by the time May 1, or even June 1 rolls around. Now that is truly terrifying.