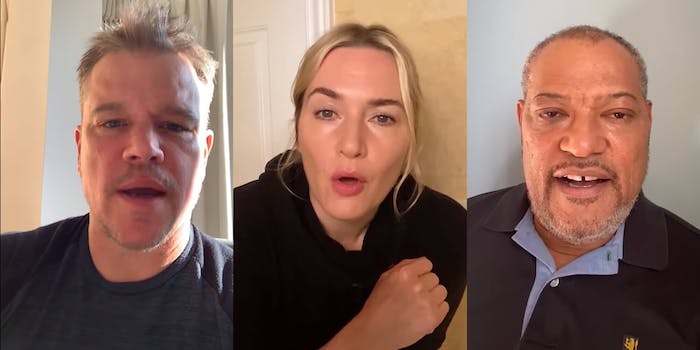 Their characters faced a fictional pandemic. Now they're helping us with ours.

In the wake of the global coronavirus pandemic, many of us have taken to watching and rewatching Contagion, the eerily prescient 2011 Steven Soderbergh thriller about a fictional pandemic that has global ramifications. And while the Contagion cast can’t come up with a cure like they did in the film, they can offer some great advice.

Over the weekend, Columbia Public Health posted a series of COVID-19 PSAs filmed by Contagion’s all-star cast, including Matt Damon, Laurence Fishburne, Kate Winslet, Jennifer Ehle, and Marion Cotillard. The advice they offer is simple and to the point, and it’s largely the kind of thing that doctors, medical professionals, and other celebrities have been giving us for weeks.

They’re offering pointers like wash your hands, practice social distancing (from at least six feet away), and to offer help to those vulnerable if they need it.

“It needs us to survive,” Fishburne says. “Let’s not give it any help.”

Damon, Fishburne, Winslet, Ehle, and Cotillard each filmed a longer video that addressed different aspects of COVID-19, but Columbia Public Health stitched each of their videos together for a shorter PSA.

Noticeably missing? Gwyneth Paltrow, who played the first victim of Contagion’s fictional virus and whose company often totes questionable science. But last month, she posted a photo of herself wearing a mask noting that “I’ve already been in this movie” and that people should wash their hands and not shake hands with other people.