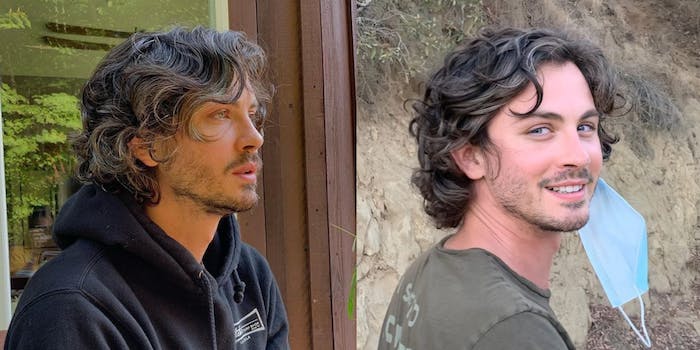 Logan Lerman is the internet’s ‘white boy of the month’

The actor is serving the internet a new look, and a ton of thirst.

Logan Lerman appears a bit unrecognizable. The Percy Jackson star usually rocks a short, dark black ‘do, symmetrically cut to shape his face. But, in a new photo that is doing numbers online, the 28-year-old actor seems to be going grey… and long.

The image, posted on Monday by his girlfriend, artist Analuisa Corrigan, has Twitter users deeming him worthy of white boy of the day, month, and year. With an increasing 18,700 likes on Instagram, the photo is the artists’ most-liked post on the platform. (It’s the third photo in the post’s slideshow.)

Some users even screenshotted moments of Lerman while on a hike from Corrigan’s Instagram Story. Even posing candidly, with a face mask hanging from one ear, Lerman’s new quarantine look wooed fans.

A glance at the actor’s Instagram account doesn’t showcase any recent photos of his new look or any updates since last month. In May, he did ask fans to donate to the Navajo Nation in the #donate4nnchallenge with a photo that showed a few grey hairs coming in. Thankfully his girlfriend is sharing a slice of the latest version of Lerman with the world.

In August it was announced that Lerman will star in the new coming-of-age film, College Republicans. The actor will play a young Lee Atwater, the late adviser to presidents Ronald Reagan and George H. W. Bush.