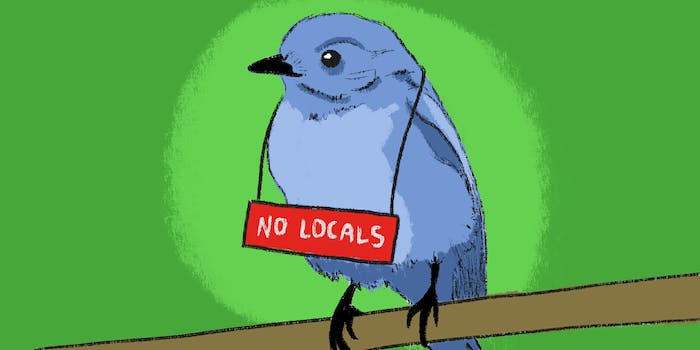 Twitter users are tired of explaining internet lingo to ‘locals’

Ban all the locals?

Twitter users are constantly creating new slang. A few recent examples include mood, chapstick and mascara Twitter, and stan. Now there’s another term that everyone is throwing around the social site: locals. What are locals? According to various online sources, locals are uncool people (sometimes from your hometown) who don’t understand Twitter lingo. Urban Dictionary calls them a “less cringey term for “normies.”

Locals are often seen as people who need someone to explain internet culture to them.

remember when kesha was educating the locals on the twitter term “mom” back in 2014 pic.twitter.com/SQJQXVoIfZ

when locals can’t speak in stan twitter or memes so you have to re-educate thempic.twitter.com/kA4l4WfObg

When locals jump on a popular meme, like Evil Patrick, or a queer internet term like wig (which Katy Perry references in a preview of the upcoming season of American Idol), the rest of the internet freaks out.

And there is a clear division between stan Twitter and locals Twitter. Stan Twitter, of course, is made up of people who are die-hard fans of a celebrity or a form of entertainment (Call Me By Your Name has a big stan-base on Twitter).

The denizens of stan Twitter often mock locals who are trying to encroach on their little corner of the internet.

when you unexpectedly find a stan in the mix of locals and have an instant connection pic.twitter.com/h5IZJH40UT

So what do locals actually tweet about that makes them stand out as locals? According to other people on Twitter, the topics are pretty mundane. Locals like writing happy birthday messages and retweeting accounts like Common White Girl. It all sounds very similar to the British Fiat 500 subgroup.

If you thought people on Twitter had shitty political takes, try having a discussion with your locals. These motherfuckers are living under a rock

Locals are apparently causing some people to spend less time on Twitter.

The term ‘locals’ has been in use on Twitter for years, but there’s a proliferation of these tweets in recent months that mention it. Maybe there are more locals on Twitter now than there were several years ago.

The people who dislike locals don’t want the Twitter they love to change, a Twitter that is filled with inside jokes and memes. So what’s the solution? Some say it’s a locals-free Twitter.