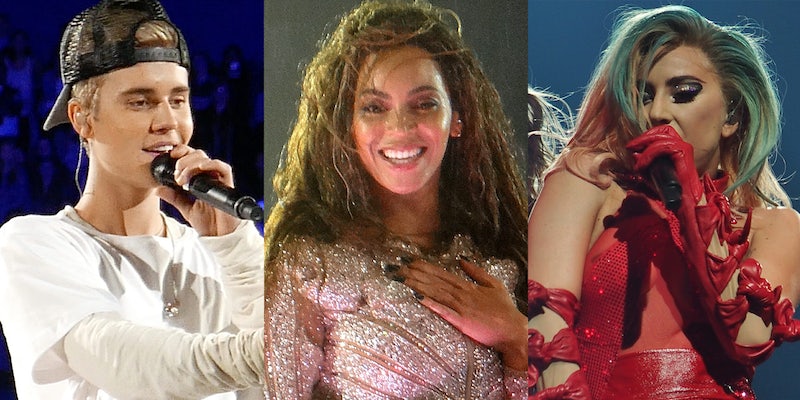 How ‘stan’ went from rap lyric to mainstream slang

Who do you Stan for?

Are you a Little Monster? A Sheerio? A Belieber? How far will you take your love for Johnny Weir’s ice skating commentary? If you’ve ever had a deep-seated passion for someone—anyone!—in pop culture, you just might be a stan. But where did the word, a mashup of “stalker” and “fan,” come from?

Let’s travel back in time to the year 2000. Eminem’s Marshall Mathers LP was everywhere and the song “Stan“—the tale of an obsessed fan who ultimately kills his girlfriend and then himself—was born.

Sometimes I even cut myself to see how much it bleeds
It’s like adrenaline, the pain is such a sudden rush for me
See everything you say is real, and I respect you cause you tell it
My girlfriend’s jealous ’cause I talk about you 24/7

Dido sang the chorus, which was a hit in its own right on her single “Thank You,” Elton John performed the song with Eminem at the 2001 Grammys to much fanfare, and Rolling Stone ranked “Stan” as No. 296 in its list of 500 greatest songs of all time. So it’s no surprise that “Stan” quickly had an impact on pop culture—the Outline notes that the first use of “stan” as a word and not a name was in Nas’ 2001 song “Ether.” What is surprising is that the word itself has become firmly ensconced into the vernacular more than 15 years later.

Whether Eminem was aware of the portmanteau when he wrote the song about crazed fan Stanley “Stan” Mitchell is unclear. In a 2013 interview with Rolling Stone, Eminem sounded surprised to learn the word’s latest meaning:

Not up for debate, however, is stan’s place in our language. Why did it take so long to come up with a word that fittingly encapsulates the American art of celebrity idolization? For that, we can thank Twitter. Fans no longer have to depend on the U.S. Postal Service to get letters to their objects of affection. Twitter takes care of that in mere seconds.

I have met so many new people through my job, Instagram help page, through the celebrities that I stan, I’ve never had 1 bad internet friend. Some of them I’ve met irl, some I’ve phoned/ftimed and I’m so glad I met every single one of them #InternetFriendsDay ❤️❤️

Social media created the ability to both share memes, find like-minded zealots, and have a more direct connection with celebrities, which helped stan slowly grow from one-off references on the platform to a full-on “Stan Twitter” category.

i just called my neighbor’s dog a skinny legend and they looked at me crazy. i blame stan twitter

While the transparency of social media provides celebs with a means of managing headlines about themselves before the tabloids do it for them, it also exposes them to the stan phenomenon, including a sort of online herd mentality and pressure to follow people back, be responsible for their fan’s actions, and sometimes confront scary threats—real or not.

In 2013, Madeline Davis wrote on Jezebel that fans were threatening violence against celebrities for not following them back on Twitter.

“There have always been crazy fans who’ve engaged in horrifying behavior to get the attention of whoever they’re fanning over (can you back me up on this, Jodie Foster?), but … never have they had the illusion of the constant pathways of interaction that exists now,” she wrote.

In the past five years since that article was written, stan has started to drop the scary parts of its stalker connotation and is used more often in a lighter way to simply mean anyone who’s a major fan of a celebrity. It’s showed up in the New York Times starting in 2011 and in Entertainment Weekly. Just last year, stan made its way to official acceptance, culminating in a 2017 listing in the Oxford English Dictionary, which defines the term as an “overzealous or obsessive fan of a particular celebrity.”

Oxford suggested this sentence as an example of how to use it: “he has millions of stans who are obsessed with him and call him a rap god.”

Clearly, stan is here to stay.

lol I mean stan. I am so old