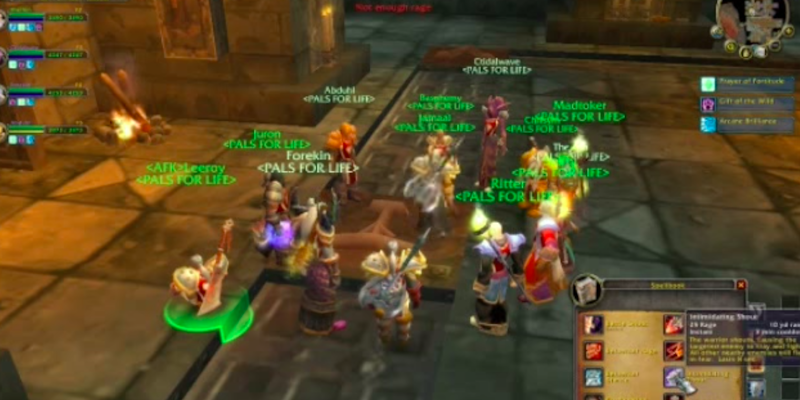 There are few things young men with poor impulse control love more than having something catchy to yell before doing something incredibly reckless. From “I’m Rick James, Bitch” to “YOLO” to “I’m Pickle Rick,” there are plenty of examples. But few have managed to become a cultural crossover quite like “Leeroy Jenkins.”

The infamous video shows a band of World of Warcraft players discussing strategy before entering a particularly dangerous part of the game known as the Rookery. While the player addressing the group goes over plans in painstaking detail, a paladin cuts him off mid-speech by charging into battle after saying “Alright chums, I’m back, let’s do this… LEEEEEEEEEEEEEEROYYYYYYYYYYYYYYYYY JENNNNNNNNNNNKINSSSSSSSSSSS!” After causing the entire party to be killed and getting chastised by his friends, the paladin defiantly retorts, “At least I have chicken.”

Here are 12 facts about Leeroy Jenkins

It was first loaded onto WarcraftMovies.com on May 11, 2005. In one day, it was downloaded more than any other on the history of the site. It has come to be the most recognizable phenomenon associated with World of Warcraft, a very popular entity in its own right.

The video was uploaded by the guild Pals for Life, who posted it with a request for constructive criticism on their gameplay.

2) The man behind the catchphrase became internet famous

Though a group of people is responsible for the video, unsurprisingly the person who has come to be most closely associated with its success is Ben Schulz, the man who uttered the famous catchphrase. At the time, Schulz was 24, a resident of Lafayette, Colorado, and pursuing his degree in electrical engineering.

The video earned Schulz a good deal of internet fame. At one point, he was offered a job with Electronic Arts, but he turned it down because he considered the pay inadequate. The six-month commitment from the company was also less than enticing.

3) It was actually a staged promotional video

It may come as a disappointment to those who wish Leeroy was actually the product of a spontaneous and ill-conceived charge to gamer death. Sadly, that’s not the case. After initial denials, Pals for Life admitted it was a staged promotional video made to draw more players to their guild in the hopes of being able to raid. If this makes you incredibly disillusioned, well, you can’t deny the video is still hilarious.

The video initially achieved virality thanks to a post on Warcraft forums and it seems bizarre by today’s standards that it wasn’t YouTube that was responsible for its spread. Then again, this was the early days of YouTube, before it was bought by Google and made an omnipresent part of our lives.

The video was first loaded onto YouTube in November 2005, about six months after it first appeared on WarcraftMovies.com. That first video didn’t much resonate, but the second person to post it somehow struck a chord. That second video, loaded in August 2006, has more than 46 million views.

5) Schulz had a hard time monetizing his creation

Because Blizzard Entertainment holds copyrights on anything related to World of Warcraft, it proved difficult for Schulz or anyone at the Pals for Life guild to reap any monetary benefits on all the attention that came their way. While their initial aim may have been to drive more players their way, when something takes off like this, it’s hard not to see it as a rare opportunity in life to cash in. After all, they created all the attention on their own. Still, Pals for Life was forced to try to sell merch that could only make very oblique references to the game itself, lest they risk a lawsuit.

Meanwhile, as Schulz and the gang were making next to nothing off their creation, Blizzard pumped out figurines and tie-ins that helped to promote their product. They did eventually bring in Schulz to provide voice work when they incorporated Leeroy into a quest in the game. He also received multiple invitations to BlizzCon, an annual convention the company holds for game tournaments and promotional announcements.

7) But Jeopardy knew what was up

In the early days of memes, one had to be slightly plugged in to be exposed to them, unlike in 2017. But somehow Jeopardy was one of the first mainstream places to reference him, doing so in November 2005, when the video had only just reached YouTube.

“Alex Trebek said my name,” says Schulz in a 2007 interview. “When I saw that, I realized it had gone beyond anything I could control.”

8) Now, it has plenty of pop culture reference

You don’t have a breakthrough hit without being a go-to reference in popular entertainment. Nowadays, TV shows mostly can’t bother with memes, since there are several new ones created every day and no one has any idea which will stick. Back in the late 2000s, though, memes came at us at a slightly more manageable pace, and shows felt confident addressing them, at least in a knowing way that showed the cool younger kids the show was with it.

Among the references to Leeroy Jenkins that already feel like a time capsule are My Name is Earl and the Jon Stewart-era Daily Show.

A deleted scene from the DVD release of the movie Year One featured a line-by-line remake of the Leeroy Jenkins video, only with Hollywood stars.

9) Other players bothered Schulz about it in the game

Schulz estimated that a stranger messaged him every 20 minutes when he was playing Warcraft during the aftermath of the video’s mass exposure. “People make a lewd comment, laugh or yell my name back at me,” he said. An indignant mom berated him for inspiring her son to constantly yell “Leeroy Jenkins.”

10) He even had an in-game stalker

Many in the game sought him out. Most of those exhibited self-control. One user very much did not. With the username “Leeroy Apprentice,” this player would try to hang out with Leeroy in the game wherever he went. It happened nearly anytime Schulz logged on. In the 2007 Westword interview, he describes the player as crazy before nervously changing the subject.

By 2007, he had gotten bored with the game and logged off. Most of the rest of Pals for Life followed suit within the next year. Schulz returned in 2011 to regular play, but he didn’t stay long.

11) He got a Warcraft movie script mention

More than a decade after the game’s release, in 2016, a Warcraft movie arrived in theaters. The theatrical release never makes reference to Leeroy, but the writer of the original screenplay copped to trying to get Leeroy Jenkins in there. That script, of course, was scrapped when director Sam Raimi took over the production.

Schulz never had a place, implied of not, in the movie. He was invited to the premiere, however. And he surprised Jamie Lee Curtis on the red carpet.

The company behind Warcraft knows Leeroy has been perhaps the greatest boon to their product not made by them. So even to this year, the company recognizes it as a central part of the game’s culture.